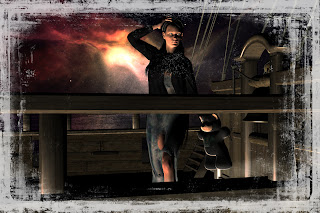 (A note about this story:

The main character in Lost is Skye Emerald McFaeland who is the MC in two novels: Mirrors and Reflections. The first of these novels will be out this year, and I plan to preview it here much as I did Paid in Gold and Blood. These are urban fantasy stories, but in this case, the magic is not very obvious.)


The first time I saw Nora Prescott wasn't on the news announcing the teen was missing. I saw her the night before in a dream.


The tall, dark-haired teen stood on a ship, alone and staring into the distance. She wore the dress they described in the news and held a teddy bear in one hand.


I'm good at finding lost things, but I usually don't get jobs in my dreams. I have a little detective agency and my work rarely includes locating people.


Being half-fae gives me a little edge over the local police in finding clues, though I have to be careful. I don't want them to take notice of me. I have far too many secrets of my own to hide.


This case called to me. I headed to her neighborhood to see if I could find anything, almost starting out the door before I realized showing up looking like a punk guy from tough streets might not be good when they were looking for people out of place. I changed to something feminine. Being half fae (which is so rare, I am the only one alive) means I am neither human nor fae and neither male nor female. I am Skye McFaeland; that's enough for me.


I didn't have trouble getting past the police. I stood with some of the girls from the apartment building, making certain they paid me no special attention to me. I don't do a lot of magic; it's painful, but this got me into the building where I felt out the lobby around the elevators. I caught memories of people coming and going; hurrying home with groceries, thinking about prom, arguing with a child about lingering, worried about someone missing from here. The manager hired a night guard. They'd be safe.


Good people. No sign of anything traumatic or of Nora deciding never to go home.


I walked around the neighborhood; apartment buildings, trendy shops. Nothing.


Even I tried to forget, but after a couple weeks, I saw her in my dreams again. Her clothing started to look ragged. She appeared night after night, and I wasn't getting much sleep.


"Skye?" Cherry said, looking into my face over lunch. "You look like hell. What's going on?"


My cousin knew me too well. I sighed and pushed away the plate of very good food I'd been toying with. "Nora Prescott."


"Yeah. She's in my dreams and so far I haven't a clue where to find her. I can't go back to her neighborhood. People are starting to take note of me."


"Not a surprise," Cherry said, waving towards my usual punk look.


"I dressed up a bit," I said and went back to the food. Two bites later I looked up. "I need to find her."


Cherry didn't argue. We ate the rest of the meal and headed back to the neighborhood. I didn't change this time. Yeah, I drew looks, but Cherry took my arm in hers and I suspected I had suddenly become trendy rather than punk. I will never understand how the human mind works, and that has nothing to do with what I am.


"Her friends took her to the apartment building and let her off," I said, passing the building but on the opposite sidewalk. I'd paced in front too often. "I checked inside all the way to the apartment. She disappeared, and no, it wasn't magic."


"Late night. Dark." Cherry knew more about the case than I expected. "No struggle."


"Someone she knew," I said. We walked on. No gawking. People here hadn't forgotten Nora the way the press had.


I looked down at my wrist, as though I wore a watch. Odd. Must have picked something up. Brushed my hand against a dress I was not wearing.


I stopped. Cherry looked at me, hopeful.


"I'm not sure." I stopped and took a little step back.


I had felt the same thing at the apartment.


"I have something, but maybe not her." I used magic -- painful for me -- to catch the fading hint of memories. The trail flickered through the air and led down the street . . . and to a dress shop. We went in, but I didn't expect to find anything. The owner, a tall woman who tried hard to look younger than she was, gave us a look of disdain. I was ready to leave until I saw her name tag. Lola Sailor.


Cherry gave a start, but Lola only smiled. "Nora? Oh, you mean my daughter Hallie. She's in back. It's so nice to have her home finally. Do you know her?"


Cherry went to call the police. I talked to Lola about how her daughter had been taken and now returned. She seemed a genuinely pleasant woman until they took Nora out of the backroom, plainly drugged and not fully connecting to the world. Her real parents arrived at a run, and I thought all was well. They took Lola away, still talking about her 'daughter' and how good their life was.


"She just started talking to us about her. Called her Hallie and then Nora and then Hallie," Cherry explained to the police.


So it was done, though the reports on the news said Nora was unresponsive.


That night she returned to my dreams, still on the ship. I knew the problem now and with a thought, I stood beside her. "Time to head for the home port." I directed the ship. "You aren't lost any more."


And so I took her home. The news the next day was good, and I slept better. Case closed.