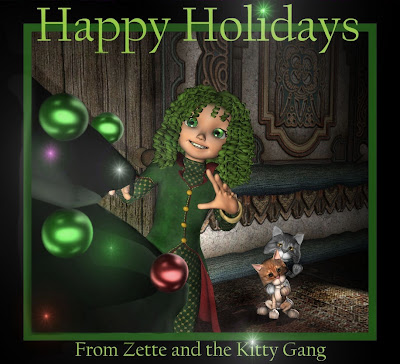 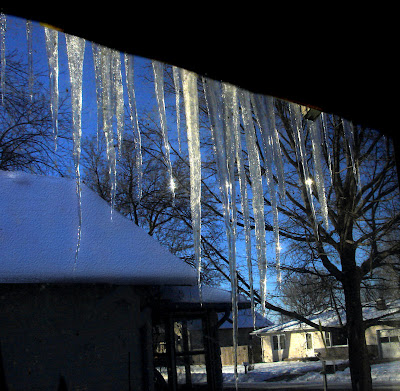 Yes, I am actually still alive. It's been an interesting month since Russ moved to New York. He was back briefly toward the start of December, and he'll be back again next weekend. I am spending Christmas alone, which is pretty depressing, but I'm sure I'll survive it.

I have a lot of work to get done, too. Russ's trip back here next weekend came as a surprise. I thought he wouldn't be able to make it for another week. Now I'm trying to get all kinds of things caught up before the end of the year. It's going okay. And it will keep me busy over the holidays, so that's probably good.

I am about 7,000 words short of 1,000,000 for this year. I don't see a problem with getting that much over the next few days. I have finished A Plague of Rats, and all I have left is the Devlin story and some background work for a new novel I'll write next year. Oh, and a couple things I need to finish up for Vision. Yes, I have to put that together, too. And get some important stuff done for Forward Motion.

I have no clue what I'm going to write on January 1. I have a new story idea, but it needs far more work than I can give it between now and January 1. So I'll probably start out with something light and simple. Since Russ will be flying back to New York on January 1, I'll want something interesting to do again.

Other than that there is obviously not much going on. I have placed three more novels with Holly's store, but it's going to be a while before they are ready to go. I'm looking forward to it. Oh, and the last Dark Staff book will be off to the copyeditor before the end of the year, too. I am so looking forward to being done with that series!

A lot of changes this year. Next year -- well, it's going to be a rough year, in many ways. I'm trying to find a way to get through it with a sense of adventure, rather than depression. So far, I can't say that it's working so well, but I think once I get past the holidays, it will be better.

And now, back to doing a little writing and then heading for bed for a few hours, and then back to work again. The one thing I can say about my love of writing is that it does keep me busy. 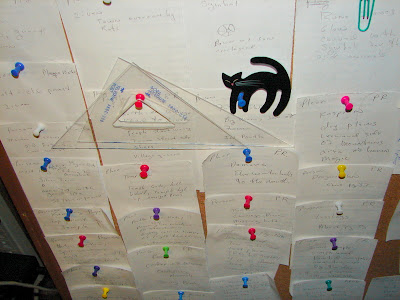 With only about twenty-one days left in the year, I find myself scrambling through the lists of things I need to get done. That picture is to a bunch of notes, still sitting here beside me, for A Plague of Rats, which I still need to finish. I'm not certain what the hold up is for it. I need to write it and be done with it, instead of messing around like this. I have the next scenes in mind, in fact. I may not quite see the ending yet, but I have a clue of where it is going. And since I know this is just the first book in a set, I know that I don't have to tie up every little tiny thread. In fact, there are one or two small threads that I want to explode into larger, and unexpected, problems in the next book.

But my interests keep getting drawn to other things, like black and white digital photography. I have a really nice book on it, and I've been reading up on some techniques and trying them out, which means fiddling around with photos for hours on end. It has been great fun, but I really should be doing other things sometimes.

I also pulled out my copy of Steering the Craft by Ursula K. LeGuin (ISBN 0933377660). I want to work my way through it and do the exercises this time. I've read bits and pieces of it before, but I never applied myself to it. So far, I've done the first exercise. I'm curious to see where and how it goes by the end.

I believe a person ought to be open to learning new things at all times. I try to read a new writing-related book each year (or more than one if I can), just to see if there is anything that catches my attention, that I think helps.

Russ was unexpectedly home over the weekend, which was really nice and improved my mood. He's been up in Minneapolis for training, but he'll be heading back to New York in a couple days. I hope that he'll be able to come home for Christmas, but there are no guarantees.

In general, things are going all right. I'm getting used to spending days alone. Russ being home for a couple days helped relieve the monotony of my own company. We were able to grab a few more can goods and frozen foods, too.

So really, the last problem is my inability to focus on work. I'll have to work harder on that part, because I'm running out of time.