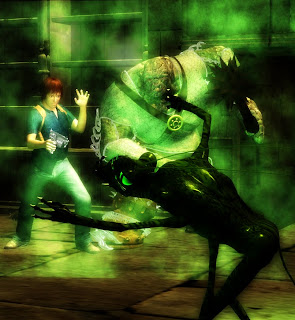 Working with Trolls
by
Lazette Gifford

The street had enough potholes that I had to skip around them, probably adding half a block to the trip from the van to the building. My partner for today didn't have any trouble though. The huge Rock Troll stomped his way across the cement, flattening a lot of it to a fine dust. Might make driving better for the locals.


"That's the place," I said, waving a hand towards the decrepit building where people had heard odd sounds. The place was a weathered, two story house of wood, with a fieldstone fence around it and a gate long ago fallen off.


Grik grunted his answer. Not much on conversations, but Rock Trolls were damned good at this kind of work. Not much could stand up to them.


The windows were boarded up which meant there could be anything inside. I darted up the steps ahead of him in case they didn't survive. Grik followed, the wood creaking loudly beneath his huge feet. He gave a nod when I put one hand on the door and another on my gun. I shoved the door open and grimaced at the sight of a stinking greenish fog.


Grik grunted agreement. He drew out his mace with the round, spiked end that was larger than my head.


Some of the other cops won't work with Rock Trolls. I'm not that stupid. They're big, they're nearly indestructible, and despite their size, they're remarkably fast. That's good when you have to go into a mess like this one. Huntins are fast, insectoid, and they never live alone.


The house was filled with rats and abandoned furniture and a few books. I'd have to come back and pick up a few of those after we cleared it out. We headed down the first hall, with rooms on all sides, the doors all hanging off their frames or torn down completely.


At the third door, I stopped so fast Grik almost ran into me. Bad news for fragile humans -- but he pulled back in time with an annoyed grunt. I waved into the room though and got his attention. I had not expected to find a nest with more than two dozen eggs and a very bad-tempered queen. She stood up on her hind legs, waving the other four as she screamed in rage. I shot at her, which would mostly just annoy the huge creature, but it kept her off guard for a moment


I grabbed a sonic out of my bag and backed up to the door, Grik retreating just as quickly as I did this time. You don't mess with angry Queens. One cut from their mandibles and you were dead from the poison in a matter of minutes.


I tossed the sonic in and Grik and I sprinted back down the hall. The walls cracked as he moved, but we couldn't get enough space and walls between us. Sonics kill when you're too close, and hurt if you don't get enough solid material between you and the bomb. It is the best way to kill groups of huntins, including those in the eggs. My head pounded when it went off, but we had cleared them out. Then I heard high-pitched screams.


"More of the bastards," I shouted. I still couldn't hear well.


We headed down the hall and to the main room. Better to have open spaces if huntin were coming after you. And they were coming. I could hear them racing down the stairs, the loud click of many feet. I couldn't tell how many.


I moved into the main room, Grik at my back. I shot one and another -- there were more here than I expected.


Grik's shout got me moving very fast, especially since the walls cracked at his shout. The huntin dropped from the ceiling and would have landed atop me. Instead, it had not quite hit the floor when Grik swung with that mace, caught it in the head with enough force the splatter the bug against the far wall.


We backed up to the door. This was going to need an extermination squad, not just a couple cops on patrol. I keyed the order in with one hand on my wrist band and never took my eyes off the half dozen huntins gathered at the edge of the hall and ready to come at us.


"One last sonic," I said, as much as I hated to use one again so soon. I'd be miserable for days. "Get the door open and let's get out."


I tossed the sonic and spun, heading out the door with Grik at my back. He slammed the door shut as I was leaping off the stairs. He did as well. We made it all the way to the yard's retaining wall before the sonic went off.


I could hear screaming huntins even over that sound. Angry. Yeah, we'd leave this for the exterminators.


So we sat on the wall and waited for them, Grik brushing dust from his skin.


"Thank you for the warning," I said. He looked at me and blinked. "I didn't know you could talk. Not many do. Why haven't you before?


"I'm a big hulking rock troll," he said, his voice vibrating the wall. "Conversations have not gone well in the past. What would we discuss? Philosophy?"


"You mean like The Way of the Rock Road by Krekic the Troll?"


Grik laughed so hard the wall began to shake and I had to stand. "Well, that's a start."


The extermination squad arrived. We waved them in and headed back to the van, Grik happily pounding out more potholes on the way. Yeah, we were going to have some interesting conversations.
The End
989 Words