I wrote something interesting...but.... 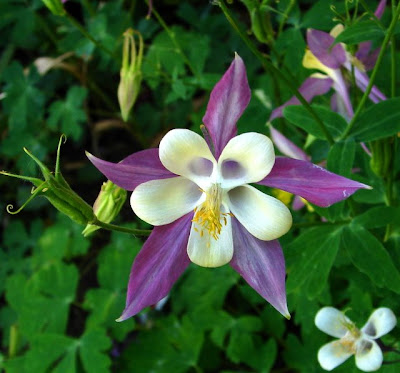 I wrote something I really liked today... but there is a problem with it:

Mark Carter should never have followed the ghost of Allisia, his murdered wife, down a dead end street.
Two years after the shocking death of his wife, Mark has finally put aside his grief, sold his home, packed away his wedding pictures, and taken a new job. At twenty-five, he's even found a new romance. Then, on a stormy afternoon, he sees the ghostly apparition of Allisia jogging along the road where she had died. In a frenzy of shock and grief, he leaps from the car and runs after her... and into a perilous world of shadows and ghosts, truths and deceptions.
Mark has stumbled into a world that parallels his own, and there he learns that his wife was not really human and is not fully dead, but rather is trapped in the area between worlds, where dangers he could never have imagined stalk her -- and now hunt him as well, as the link back to the world of light.
He also learns of Allisia's part in a plot to invade his world, but that she had defected and is now paying the price for her love of him. Uncertain whom he can trust in this new world, and learning he might become trapped as well, he still joins forces with her to fight back her former commander and defeat the dark forces bent on invasion. Their success is bittersweet, however, since Allisia can't come back with him, and he
must leave the shadow lands or risk being the key that opens the doors for others.
Dead End Street is a completed urban fantasy novel of 96,500 words. The book has potential for additional stand-alone novels featuring Mark, his dead wife and the trouble brewing between the two worlds.

So, what's the problem?
I haven't written this book. And now I want to. And I have far too many other things to do.
But it does look like an interesting little story, doesn't it?
My life is getting too odd when I can write the synopsis and then think about the novel.
Posted by Zette at 6/29/2008 12:51:00 AM 2 comments: 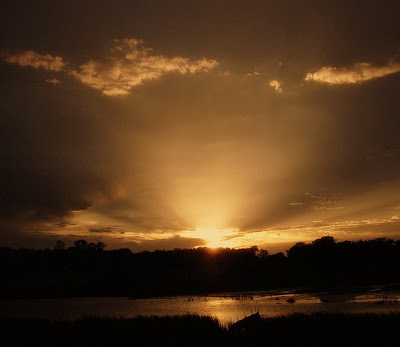 So, on Saturday I saw the mailman go by and I went out to get the mail. In the box was a letter to my address, but not to me and not from anyone I knew. I saw the mailman had parked down the street to sort out the next clump of mail, so I walked down to give back the letter. He got out before I got there and came to take.

"Yeah, I wondered about it," he said, taking the letter. "But I thought it might be one of your pen names."

How odd -- but it just cheered me right up to think that the mailman would even know that much about me. Granted, he's been our mailman for at least twenty years and noticed all kinds of rejections, I'm sure. Since I am primarily Internet-based as a writer, I have less opportunity for local notice. I've had a couple pieces in the paper, but mostly it's people in far more distant areas that see my work.

So, just one of those odd things that happen now and then that gives a little extra fun.

What else is going on? Russ is still trying to come home for our 29th anniversary. He hopes to fly home on the 19th and leave on the 23rd. The idea of seeing him again so soon is really nice, but.... the price of flights has more than doubled, and we're not exactly really doing well in finances. But we'll see. It might happen.

Writing work is going odd, but moving. I need to finish up at least one short story. I don't know how those three got stacked up there like that -- but I'll start concentrating on them and get the little beasts done. I'm working on other things, too, and hope to get all kinds of things caught up soon. We'll see. I need to get focused on housecleaning, too. I've had a bad couple weeks for various reasons, and when I'm in that kind of mood, nothing gets done outside of writing -- which is, as always, my escape. Even the writing slowed up this time, though. Actually, it's been slow for the entire year, but I'm getting there.

I am especially happy with the notes for Draw the Line, though I'm nowhere near done with them. I think this might be my main NaNo book -- if I can even get everything I want by then. If not, it might be the new book for 2009. No, it's not too early to be thinking about something like that if it's a book that requires as much pre-work as this one does. I have three alien groups to invent, plus their cultures. Since it's from the new Tree Universe set, I have a basic premise -- 'We are all fruit from the same tree, we just fell to different grounds.' This is to explain why the aliens share a lot of basics -- but I still have to do a great deal of work to create the mutations that make them different (one group is quite different, in fact), and also work on the creation of their common ground.

Oh, just had a thought and had to go add it to the SuperNotecard group for this. I love thinking these things through. I have a group that works somewhat like Prairie dogs, which I believe are the only animals where the adults leave the original tunnels and dens to the younger members, and they move out to start a new area, where it is far more dangerous. That way, the animals with more experience are in the more dangerous areas.

Anyway, time to go back to work on the SuperNotecard stuff and get a bunch of other work done. I think I hear the dishes calling to me... and that can't be good.