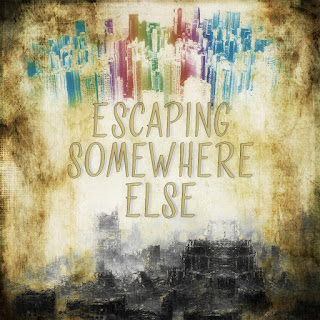 (Previous)
A handsome steed of silver with golden wings came to me and knelt so I could climb up. There was a small saddle, my legs bent backwards over the wings and a pommel to hold on to.  I grabbed it tight with one hand and held to Edmond with the other.
"I hate flying," the cat mumbled into my jacket.
"It's starting to lose a lot of it's luster for me, too," I admitted.  I looked to Ellin.  "I have no idea what I'm doing.  I think you better do the directions for now."
"Yes," Ellin agreed.  "You're help will best be used when we get there.  We are few.  The faster we can get to Lord Cayman, the better."
I nodded, feeling chilled with the idea of something this important was in my hands.  I don't like being in charge .  I especially didn't like being in charge of something that could get others killed.
One of the fae leaned closer to me from another horse.  I could not see his face, but I had an odd sense of calm from him.
"We have been here a long time, with little hope of ever getting home," the voice said.  A woman's voice, which took me by surprise.  "You give us a chance, Protector.  I do not want to live here without hope.  Not any longer."
"Take care," I wished her.  Edmond had even pulled his head out and looked at her.  "Please take care, all of you."
"We will. But we will not hold back if the chance comes.  We will all do what we can as I expect you will as well.  Let us go, Ellin.  We're ready."
So Ellin's horse leapt out into the sky.  Edmond buried himself in my jacket again, and we took to the air with the others.
There was one huge problem, of course.  There was no way the people of the city couldn't see us coming, all those lovely flying horses in the air.  I could see a dozen or more griffins taking to the air now, coming at us in a swarm, screaming in the wind.   The fae brought up their swords and they glinted with power.  I just bowed low over my horses neck and hoped he knew enough to keep out of danger.
Things fell past me.  One was a fae, clearly dead.  I knew it even as I started to reach.  My heart pounded.  The griffins soared and screamed, but several of them fell, too.
I kept my eyes on the city, which grew closer.  Beautiful, really -- glass and gold, glittering in the sunlight.  Ellin -- I thought it was still him -- was leading the way now and others were fighting off the griffins behind us.   I glanced back and felt a surge of hope. There were far fewer of the creatures in the air now and the fae were holding the line.
We swept down over the square, circling once, but there was no sign of anyone trying to oppose us.  That worried me.  I started watching the buildings, having had trouble with intelligent, moving buildings before.  They seemed solid and still, even when we landed and I slid off the winged horse.
I held Edmond tight, all too aware that we were still in the air on something floating.  I don't know what I would do if we started to fall, but I'd hold on to the cat.  Ellin was down and dropped his armor.  The others were doing the same, all of them looking around with worry.
I could see shadows moving at the edges of the buildings, but nothing more.
"That building," I said with a nod towards a squat blue building that looked like a sapphire in the sunlight.  "I can't say where exactly inside, but that's the location.  How do we get in?"
There didn't appear to be any door and I could sense a strong shield of magic around it, too.  In fact, there was magic around everything, as though whatever lived here did not want anything from the outside getting in; look, but don't touch.
I'd hated that when I was a child.  It annoyed me more now. I walked over to the building and the fae followed me as though they thought I had a clue about what to do.  I looked at Ellin and was pleased to see that he was studying the building and not waiting for some miracle from me.
"Where are the people who live here?" I finally asked.
"Watching us," Ellin said.  "Waiting to see what powers we can bring to bear on this problem.  If we get inside, there will be trouble enough."
I didn't like the 'if' part.  "How have you gotten in before?" I asked.
"A little magic," he said and lifted his hand.  "But we were not in the right places before.  I suspect they simply wanted us in where we were easier to kill."
"And they don't want us in here."
"Apparently not," Ellin said. His hand lifted and magic played along the surface of the building.  "I can sense no weakness --"
"What about the door?" Edmond asked.  I looked down at him.  Ellin frowned.  Edmond looked from me to Ellin and back.  "You two don't see the door, do you?"
"No.  Why can you?"
"Cats don't see the same things humans do," he said.  "Why do you think we're chasing things in the middle of the night when you can't even see them?"
"Honestly?  I thought cats did it just to drive humans crazy."
"You don't believe we're keeping you safe?" he asked.  If he'd had an eyebrow, it would have been raised.
"A discussion for another time, Edmond.  Show me the door."
"Huh," he smirked.  Yeah, he'd won that round.
But the griffins were starting to circle above us.  We needed inside so the real battle could begin.
To Be Continued. . . .
990 Words
http://www.fmwriters.com/flash.html
https://www.facebook.com/groups/fridayflash/
Posted by Zette at 4/29/2016 03:23:00 PM No comments: