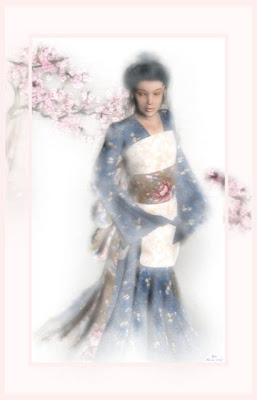 I am determined to get back to this blog!
Okay, I have been busy, so there is some excuse for not posting here as often as I would like. And I was ill for about a week -- still suffering from mind-numbing headaches, but everything seems to be easing. I had a depressing March, but it's almost really spring (no snow on the ground at the moment, though it does keep showing up!), and I think that's put me in a better mood. That and the fact that I've actually gotten some work done. The last two books of the Dark Staff series are finally published and available at Double Dragon!

Done! Really done this time! I did the cover art for the last two books, too. You can see the original work here:

I received a contract from a British publisher, Studymates, to do a print book on writing science fiction for them. I hope to be able to do it well. I do seem to have a knack for writing books about writing, so I have hopes for this one!

I'm working on various other things, of course. The third Silky book is moving along at a sedate, but fun, 500 words a day. It's my 'first thing' exercise each day. Then I'm on to whatever has to be done. The rewrite of Silky 2 is going well, also. It's a major reworking but I've really enjoyed it.

Back at the end of February at The Plot Bunny Farm (I LOVE that name!), I saw a post about first lines. I went and pulled up some of my own, and then promptly forgot to do anything with them. So here they are -- a month later, but at least I got to them!


1. The first rat tumbled down the hillside, slid across the mud at the edge of the pond and then scrambled to his feet. -- A Plague of Rats (Fantasy)

3. A roaring fire warmed the waiting room outside the Queen's Suite, a welcome sight for anyone who had braved the chill spring morning to come to the palace. Silky 2 (Fantasy)


4. I tried desperately to block out the world -- both worlds -- while my fingers brushed across the ancient harp's strings. I played Carolan's Ramble to Cashel, the bright tune momentarily lifting the gloom that had haunted me for the last few days. -- Mirrors (Contemporary Fantasy)

5. Lightning flashed so brightly that for one heart-pounding second I thought a bomb had gone off over the city. -- Summer Storm (Contemporary Fantasy)

6. The first leap into the stars had not been the high point of Earth's already sordid history. Oh, the ships were fast -- but then humans had always favored speed over sense: How far are we going and how soon will we get there? -- Farstep Station (Science Fiction)

7. Hot white lights picked him out on the stage, blinding him to the crowd again. -- Serendipity Blues (Mystery/Adventure)


8. Faith didn't know how much her life had already changed when she slid into the house and out of the winter storm. -- Differential Equations (YA Adventure)


9. The night came, a cold black Tasal night in the depths of the endless winter, where the sun slept beyond the edge of the world, and never showed himself. --Peri's Gift (Fantasy)

10. From the crest of the high mountain pass, Katashan stared all the way to the golden shore and sapphire sea far below. -- Paid in Gold and Blood (Fantasy)

11. Marcus tapped his fingers across the board, righting the pole-ward drift of his little fighter as he headed for the curve of the horizon. -- Ada Nish Pura (Science Fiction)

12. A dirty crust of snow and ice crunched loudly beneath Devlin's boots, the sounds picked up by the array of sensors throughout the loose, white safety suit that hung over her, a seemingly insubstantial protection from...Devlin didn't know what was out there. -- Medusan Mutation (Science Fiction)

13. If Devlin had paid any attention to the news, she would have noticed the pattern, and she would have seen the trouble long before she was so deeply involved that there was neither an easy, nor honorable, way out. -- Honor Among Thieves (Science Fiction)

15. There weren't supposed to be any hills in Nebraska. -- Muse (Mystery)

So there. A full entry from me, and I hope to keep at it at least once a week for a while. I don't know where the time goes sometimes, though!

What I gave myself for my birthday 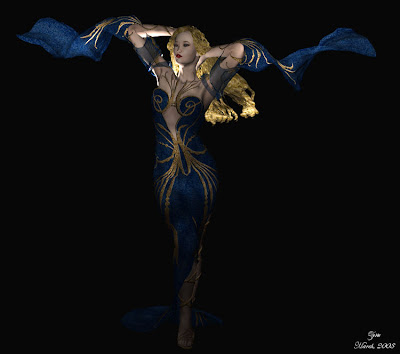 Last weekend I turned a year older. Russ could not make it home, so I spent much of the day doing just what I would have been doing if it hadn't been my birthday. No presents or anything like that, so I decided to give myself an odd little gift: Less stress.

For the last several months, I've been half-panicked and stressed about everything. This isn't a surprise since I have never done well with big, unexpected changes in my life. Russ going to New York for work is the worst of that type of change that I've faced since my father walked out on his family and two years later, when I found myself supporting my mother and sister at the age of 15.

I like comfort, calm and quiet. I haven't had that for a while, but I came to realize that much of it was based on my own state of mind. So I decided it was time to settle down and just accept that things are as they are and make the best of it.

Since that day I've written more and done more art than I usually do in a week since Russ took the job.

Can I keep it up? I don't know. I am skirting around things I really do need to get done. I have things I've been planning for Forward Motion that I wanted up long before now, but I'm still toying with them. I will get it done, but it may not be until April or later. I am not going to rush ahead and feel like I need to put my writing and art aside in order to get everything else done.

The writing is going well. I am doing some major work on Silky, though it may not be really apparent since the story is the same. I think it will read a lot better, though! I have started the third book as well, and I'm using it as a sort of morning exercise -- I write about 500 words on it before I go do anything else. It will move slowly this way, but I'll likely start writing more after I get a few other things cleared up. Or maybe not. It's kind of fun to pull it open first thing and just move the story forward a little.

There is a second book between the two, and I'll be rewriting it after I get Silky done.

It's fun to fall into stories like this again.

So maybe now that I feel like I'm really back into writing for the first time this year, I might actually have something to write about here again! Oh, it's not like I haven't been writing -- I've done over 100k so far -- but it was just adding to my stress level, since I kept feeling like I had to work harder on it, do something more, etc. Now that I'm back to the 'this is fun!' stage, I'm ready to write about it more as well.

Or at least that's how I fell tonight!