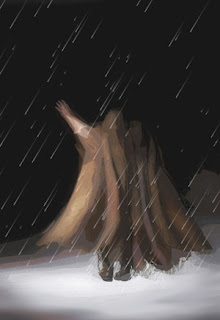 
We knelt on the hill top in the falling snow, obediently waiting for God. Papa said God would come tonight. Papa stood before us and stared up at the sky, his dark eyes lost in the shadows, and his lips moving in an almost silent prayer. God was coming, he said. And we were ready for him.

But it was so cold that I shivered, even knowing it would make papa mad if he saw. I couldn't help it. He said I was a child, not a man. He said I was weak and wouldn't get to heaven if I wasn't strong enough. He tried to make me strong but I always failed.

The baby began to cry from the cold, and cried louder when papa slapped it twice. He slapped mama too, but she only stared back at him, holding the baby.

"Feed that damn little bastard," he finally said. "Feed it and shut it up. Doesn't matter. It's going to hell for crying on the night God is coming. God won't take no damn screaming babies to heaven. You might as well throw it away, Agnes. It ain't coming with us."

But mama pushed the baby under her thin shawl and gave her milk. She quieted then. I envied Mary that shawl and the warmth next to mama's body.

Luke moved slightly beside me. I gave him a warning look and he stilled again, his dark eyes wide with fear. Papa would come by soon. He'd know if either of us moved because the snow would be disturbed. He'd had us practice kneeling in the snow for years now. First me and Michael and now me and Luke. Michael went to God more than two years ago. Papa says it was God's Will, but it was really just the cough he got kneeling in the snow so much. Michael was never strong.

Luke is stronger, like me. I'm the oldest now Michael is gone.

Papa came stomping through the snow and stared down at us. I hoped Luke hadn't moved enough to disturb nothing. I held my breath and pressed my hands tighter together -- though they were already numb with the cold -- and truly prayed not to make papa mad tonight.

He stayed there a long time but I didn't even shiver. Neither did Luke. Papa finally walked away again, back to the pine on the knoll where he could look down at town and see the street lights and people -- doing whatever they did in town. We never associated with them much. I wondered what they were doing, waiting for God.

The snow started to fall harder, making it difficult to even see papa by the tree. More snow was good. It meant you could dare move a little and papa wouldn't know cause the snow would cover it. But it was getting real cold now, and the wind was starting to kick up as well.

Maybe that was how God would come, on the wings of wind, blinding us with snow and cold and then taking us into heaven --.

I wondered what it would be like. Nice to see Michael again. He used to smile, sometimes.

Papa was still at the tree. I could see his cloak, blown back in the hard wind. I even heard him laugh. It was never good when Papa laughed. If we'd been back at the homestead, I'd ha' run to the fields and worked, even in this weather. I'd ha' cut wood and cleared boulders till my fingers bled. That was the only hope when papa laughed.

The wind blew hard then died down, though I could hear it wailing across the valley below us, heading this way. Papa turned back to us. I felt my heart pounding in fear and expectation for the first time.

And the wind hit so hard it knocked me and Luke down. I heard the tree branch crack and fall.

When I got there, papa was dead, his head caved in. Mama stood up, holding Mary close to her. She put a hand on Luke's shoulder and she smiled at me.

"But -- but God's coming," Luke said. He looked around, stunned, like he expected God or papa to step out from behind the tree.

"God's been here and gone again," mama told him. She held tight to his shoulder. "Sometimes he does answer prayers, you know."