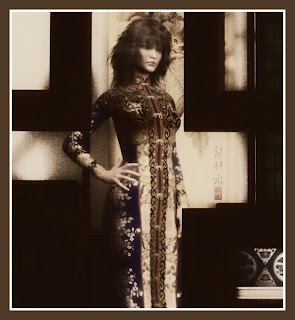 
There were not many times in Master Designer Kerick's career when he had panicked. Twenty years ago, presenting a bold new idea for Talisa library had been the last time he remembered, staking his entire future career on the idea that maybe people really went to a library for the books and that they ought to have a prominent spot in the decor.


He'd made his name in a dozen other new buildings since then. The elite of the elite sought him to design their new businesses and homes and he had more work than he could handle. He only accepted the jobs that presented something new and exciting for him these days, and only worked for the joy of the creativity.


Kerick knew the summer palace for Princess Ling would be the high point of his career, and he could doubtlessly retire on the commission if he decided to. Oh, people warned him she was dangerous to work for, of course. They still knew old magics in the east, but he didn't have anything to worry over as long as he did his work well. He planned not to make any mistakes.


Princess Ling, twenty years from home and missing the place she had grown up, wanted a small version of the Imperial Palace of a mere ten acres instead of a hundred. They worked out the details for a dozen buildings and gardens, including intricate mosaics and artwork on nearly every wall. Kerick wisely hired local refugees from Ling's homeland to help with the details and by the time the framework of the buildings were in place, he was already considering designing his own new home on the island he'd buy when the Princess paid him.


He was especially lucky because the Wong brothers had emigrated to Talisa a few years before and brought with them an ancient paint making art so he could acquire the very special colors needed for the art. The twins were in their seventies; cantankerous, but exacting in their work. They were the last people he expected to have trouble with.


But there it was: A monumental problem when he opened the first cannister of paint for the intricate designs on the entry way wall of the winter garden.


The white paint was not really white. A lovely color, beyond a doubt, but more the cream of clouds on a spring sunrise rather than the pure white of snow on distant mountains.


This would put the work behind by days if not weeks. He hoped this might only be a mistake in the shipment and rushed across town in hopes of making the situation right.


He had no such luck. The twin brothers were adamant about the paint.


Kerick finally made his way to Princess Ling's small home (only four stories and hardly more than a city block), and there met with the lady.


"I have encountered a problem," he admitted straight away. If she intended to turn him into a frog or worse, best just to have it done. "There will be a delay in the work while I find somewhere that will make a proper paint."


"Paint?" she said, her fingers moving, but he hoped only in a gesture of impatience.


"I fear, Princess Ling, I was mistaken in one of my decisions," he said with a bow of apology. "It turns out that two Wongs don't make a white."