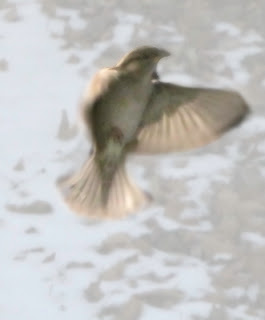 (An earlier version of this story was originally published in Ideomancer)


A bird flew out of the brown, leafless bush. Tom hadn't seen an animal in years, not a wild one. The small, brownish bird wouldn't have been counted as much more than a nuisance before the flares. Now he watched with his heart beating hard as the bird swept into the air and fluttered away again.


A single bird wasn't a sign of the end, but he wanted to believe they had finally pulled through the worst of the disaster. The scanners, the ones that still worked on the high ground, had shown no new flares erupting in the last month. Now, if the rain would just come again. . . .


The scientists, hiding in their own holes, said the water vapor was mostly still in the atmosphere. The oceans were lower, the polar caps diminished -- but not much of the water had actually escaped into space, lost forever from their protective envelope. Tom wanted to believe the news, but until the rains came, he was going to be a doubter.


Most people doubted these days, which was the real reason the scientists didn't come out of hiding. There were so many who said the scientists were somehow to blame, that it wasn't even safe to say you thought this a natural disaster. People wanted to find blame and for many it meant either the fate of God for their sinful ways or the stupidity of scientists who should have done something different. There was no joy in blaming blind nature.


Too many people had lost loved ones in the flares. In another generation, they might accept more easily. Faces forgotten; the easy life lost forever. As Tom stood by the opening to the old mine, he tried to banish his own ghosts again.


Instead he shivered, still unconvinced this was the world he wanted to live in. He missed stupid things: Television, DVDs, and the ability to run down to the store and pick up some potato chips. His mouth watered at the thought of old, lost foods. He shoved the thoughts away, thinking he should run tests on soil and atmosphere. Unfortunately, even that much science was suspect these days.


Hell, it didn't matter. Either the rain came or not. The tests wouldn't make any difference and he didn't give a damn any more. Let the others have their rants and blame the scientists, if that made them happy and gave them purpose. And the scientists were certainly wise enough not to make a show of themselves these days.


And yet he still made this trek, up from the depths of the mine where they had stored with food and converted the dirt hole into their world. Five years now, living in the depths of the earth. He turned to go back again, slow to give up even this view of desolation for the dark dirt of the world he now called home.


As he turned, something brushed against the back of his neck, startling him. Tom slapped at it and spun, his heart beating double time. Nothing there. And then --


A breeze blew against his face. He felt a moment of numb panic knowing he couldn't get back to the shelter in time to avoid a flare.


He looked upward to see gray clouds scuttling across the evening sky, casting shadows against the ground. He stared for a long time.


And Tom sat on the ground and wept tears into the dry dust as he watched the rains come.