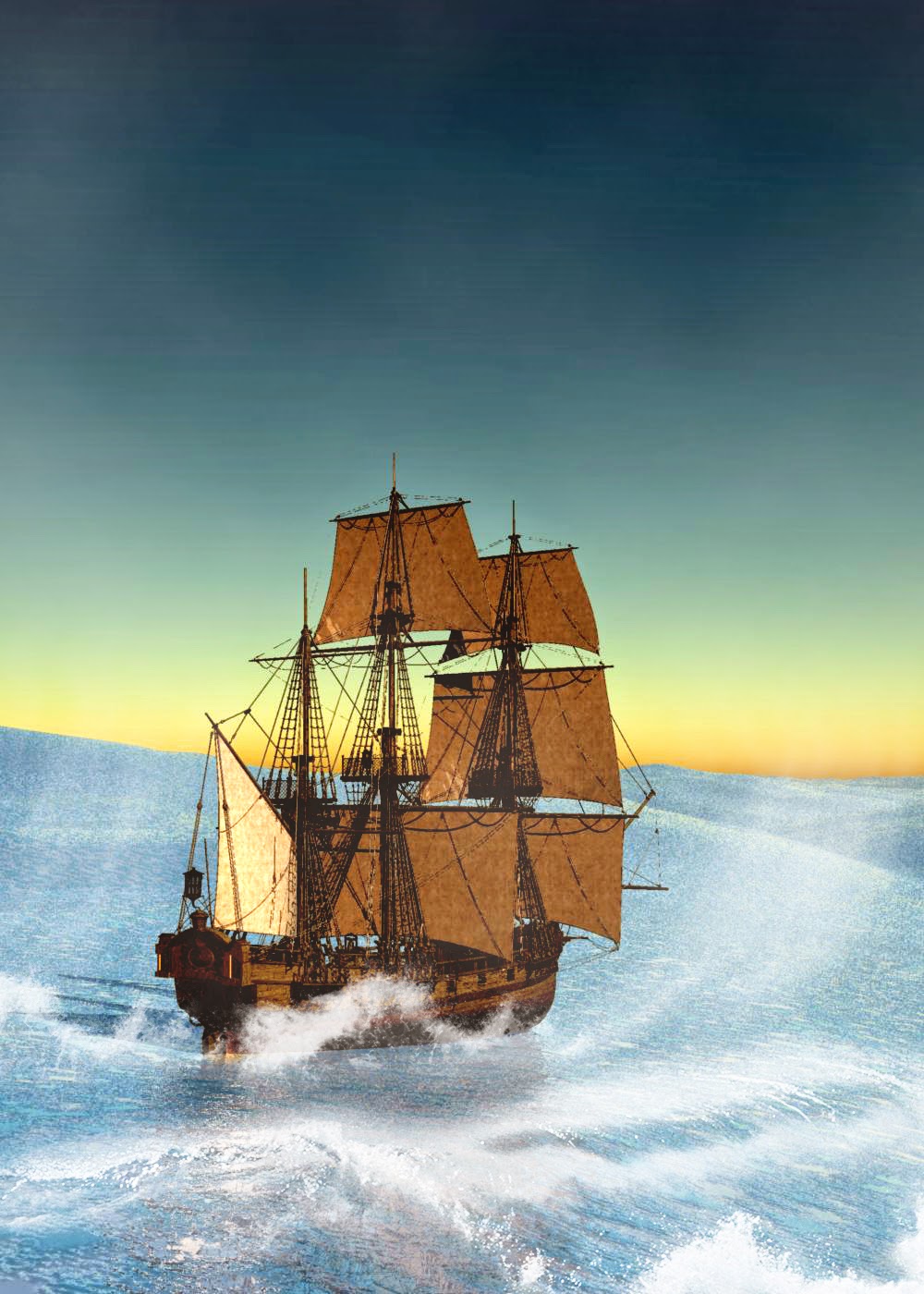 Not many ships headed northward this late in the season, but Garwood's aunt had done the readings and she'd never been wrong. "Go this week," she said, holding to his arm and shaking it as though he wasn't paying attention. "Get stocked and go with the tide late Friday. You'll have good luck with it, my boy. Don't leave without him, though."
He'd tried to ask who, but she was already heading out the door, laughing brightly despite the pouring rain. He couldn't remember the last time she'd been in such a good mood. His second had stood by the desk, frowning. He always did.
"She's never sent us wrong, Davey."
"But she's never laughed when she left either," he said. He looked down at the desk where she'd traced out the path. "North. This time of year."
"We can always turn back."
Davey wasn't going to argue. He made some complaint every time, despite having grown used to Aunt Celia's predictions.
"We only have a week," Davey said. "I better get to work."
Davey was good at his job. He'd rounded up crew, bought supplies, moved their trade goods from the warehouse to the Cloud and they were ready to sale on the appointed day.
Don't leave without him, though.
He had no idea who the person might be. Someone from the crew? Davey himself? He paced the deck a couple times and thought he might just prepare to sail. The tide was changing --
A man walked up to the ship, talked to Davey who was getting ready to come back aboard. He gave a nod and then looked up at Garwood and nodded again.
So they were going. The man, Yarwood, paid ten silvers and had brought his own food and gear. He was happy to stay on deck, but Garwood had a spare room for paying passengers.
Yarwood was a quiet man and for the first half of the journey, hadn't spent much time with the crew. Now he paced the deck, always looking to the north and northwest, each day growing increasingly anxious. Fogs had spread in around them as they sailed into the colder regions, and still he watched.
Looking for someone? Were they going to be pirated? No. He was too obvious; so obvious that Garwood couldn't ignore it any longer. He crossed to stand by the man, signaling the others to keep watch on them.
"It's my last chance, you see," the man said suddenly, without any prompting. "If I don't spot home this time, I know I'll never have another chance. I've sailed this way before, but the ships and crews were not pure enough. It's hard to find humans who are."
Madman. Great. But he never took his eyes from the horizon.
"There's nothing out there, you know," Garwood said softly. "I've sailed this way a dozen times."
"Nothing but myth, forgotten places and . . . Something lost."
Myth. Aunt Celia used to tell him stories about a mythical island where their family had come from, long, long ago.
"Tilania," he said aloud.
That won a quick look, finally. "How could you --" he lifted his hand. "Ah. You are of the blood. Of course. Not pure blood, but still. . . You give me hope."
He hadn't meant to, but at the same time he couldn't even begin to dissuade this man of his hope. Instead, he stood there with him, staring as though he expected --
He saw something. Clouds low on the water, he told himself.
"Land -- land ho!" Murphy shouted from the crow's nest. "Dear God, land --"
He could see it now; not simply land but a place of green trees and spiraling towers of glass. It caught the light and brightened.
Yarwood laughed. He was stripping off his shirt and shoes and already climbing up the railing.
"You can't swim there! We'll get you to this place. We'll go in to the bay --"
"I'm sorry, Captain Garwood. You'd never get that close," he said. He reached out and touched his shoulder. "Not this time. I'll tell them about you. It may be another time that you'll sail here and see Tilania again. If so, it means you will be welcome. But for now -- what is in my room is yours. I think you'll find it worth the trip. Good journey, cousin. I suggest you turn around and go home, though. This is a bad time to sail north."
He stood on the rail. Garwood still tried to catch him, but he arced off and into the water.
"Damn! Get the rowboat --"
But dolphins had appeared around Yarwood. Dolphins in waters where he'd never seen them before. Yarwood caught hold of the fins of two and they were quickly skimming the water and heading for the island.
Garwood stared. The Island was starting to fade, even in the bright light of day. He blinked and it was gone. He heard his troubled crew, but he could only stare. Even Yarwood and the dolphins had disappeared.
Eventually he went down to the room where Yarwood had stayed. There wasn't much, except for two small wooden boxes, each about six inches square and just as tall. He opened them both. Diamonds in one, emeralds and rubies in the other. A king's fortune. Aunt Celia was right; they'd certainly had good luck this trip.
And he knew he would always scan the sea when he sailed this way, looking for the place where Yarwood had gone; a place more precious than the jewels he left behind.

I really loved this story, Zette! Very well written, and the story's scope is huge, while being contained in a flash fiction. Really love it!

I liked this one! It's just exactly right.
Hanneke

I wonder if they will only be able to find the place at a certain time of year. It seemed like they might have seen it before otherwise.

Thanks for the comments, everyone! I'm glad you liked this one. And Jon Jefferson -- or the place might be magic and only seen when it's appropriate. (grin)