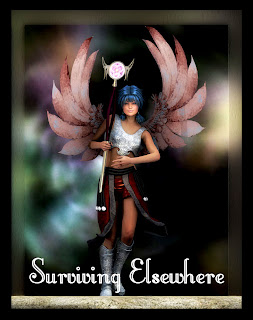 We took quickly to the sky, none of us willing to stay too long in any place now, least of all me. The cottage quickly disappeared behind us and I glanced back only once. The broom was still sweeping up the mess, but other than that, the place appeared back to normal. Good. I could stop feeling guilty. I had other things to worry about.


We continued to gain altitude, but finally leveled off well below the scattering of clouds, though still high enough that I became far too aware of how I was sitting on a flying motorcycle with nothing between me and the far ground. I grabbed tighter hold of the seat and took a few deep breaths. My heart pounded too hard, but then it had almost from the moment I crossed over into Elsewhere.


Maggie flew back and forth around us with Edmond draped around her neck and across her shoulders. He had his eyes tightly closed and I suspected every one of his claws had caught into something to hold on. Maggie's wings beat gracefully as she climbed upward again. I didn't think anything would get past her.


Davis remained bent over the handlebars, his head turning from side to side as he looked for trouble as well. Apparently everyone got paranoid around me.


We'd gone about an hour before I began to appreciate the scenery. I watched the patchwork of fields, villages and stands of trees give way now and then to a body of water. A flock of birds took to the air off to the right, lifting from a stand of trees and curving off into the sky. Some of them glittered, catching the sunlight like flying prisms. A couple of the trees seemed to be waving as we passed.


Nothing, so far, had come after us, though. I hoped we weren't far from the city now, though I had to wonder what good that would do. I seriously thought I ought to tell them to take me back to the gateway and I would cross back to the other world. I would take my chances on Sheriff Creston.


Though neither of them had said I should go back and I trusted Maggie to take care of me still. I had the feeling there was something going on they didn't understand any better than I did, in fact. Maybe that meant going back over would not be any safer.


After all, there had been Tommy Creston, hadn't there? What he'd done wasn't normal. I wished I hadn't shot him, but what would have happened if I hadn't? How many more would he have killed?


Could I have gone to the officials and told them what I saw?


Gone to Sheriff Creston and told him that his son was a monster?


It was done. There was no going back.


I don't know how long I had been staring ahead before I realized I was looking at the city. The place was huge, with multi-colored buildings rising up into the sky. It looked oddly normal, except for a definite lack of smog. Oh, and the things flying around in the air off-set that idea of normality (which I suspected I was going to have to redefine anyway). A couple winged motorcycles went past us as we neared. So did a flying carpet. I watched them head into the shadow of the city -- and in the next moment the last feeling of normality disappeared.


Two of the buildings got up and moved.


They were not small buildings, either. They were huge, towering edifices of stone and glass which had been standing sedately at the edge of town. They looked as though they rose up on legs and started walking away. I saw smaller buildings fleeing like ducks before an ocean liner and everything parted to get out of the way and then settled back into the wake.


I wanted to ask if that was normal. I decided that maybe I just didn't want to know.


Maggie swept by and pointed down. Davis nodded and we spiraled out of the air and down towards a wide green area below. There were a few others around but no one seemed to take special notice of us.


I got off the motorcycle and gave it a friendly pat. It had been the best, calmest few hours I'd had in Elsewhere.


Maggie landed lightly beside me. Edmond opened his eyes and looked around.


"Ground," he said with the reverence some people use for chocolate or cheesecake. "Down and safe. I hate flying."


He pushed off of Maggie's shoulders and landed on the grass where he promptly rolled over and spread his legs out as though he was doing an odd version of snow angels without the snow.


Maggie rubbed at her neck. "He's heavier than he looks," she said but smiled. "I saw the towers take off as soon as we came within range. I don't think that was a coincidence."


"I was thinking the same thing," Davis agreed. "Where do we go from here."


"I think we should head straight for the court," she said. "You don't have to come along, Davis."


"I'll walk with you," he said. "It's a long ways between here and the court, and this boy is a magnet for trouble."


"Just be ready for trouble," Maggie said. But she smiled again, too. "Whatever is going on, once we get you to the court, they'll figure it out and fix it."


She sounded very assured, but I couldn't help but notice that Davis didn't look as certain. Not only that, but the buildings were still moving. Someone wanted to know I was here.


That couldn't be good.

Hi Zette: off topic but might be worthwhile: John Scalzi is having his yearly ‘let people promote their own non-traditionally published books’ day.
He gets rather a lot of traffic of people interested in SF, so it might be worthwhile if you could put up your links to your new books.
This is the page:
http://whatever.scalzi.com/2013/12/03/whatever-holiday-shopping-guide-2013-day-two-non-traditionally-published-books/

PS. Sorry for not sending you anything for a while. My ereader crashed when I was 2/3 through Muse, losing all my flags, and now I'm taking a course which is using up all my brain-space 'till March.