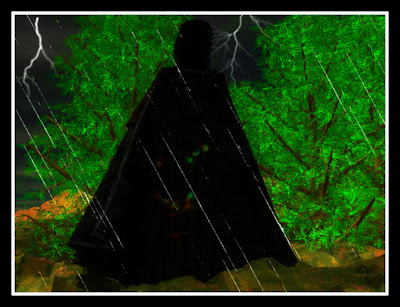 
I did not bow to this thing enveloped in darkness. Subservience would win me no points. I could see nothing within the dark folds of the cloak as though night itself wrapped around the figure within. Tall and human shaped, though that last probably didn't mean anything here in Elsewhere. I knew many creatures on this side had the same shape as humans and others could assume any shape they wanted. I had a feel of cold from this thing, and darkness of the soul -- though that had to be my imagination running away with me.


Not human, though, I thought. Don't expect something normal.


Whatever this thing was, I knew it meant no good for me.


The storm continued to rage around us, the lightning so bright I could see the flashes through closed eyes. The thunder crashed through the world in such a blast of sound that it buried even thought.


"Delivered, Great One," the elemental said, the ground shaking with his voice. "Delivered and free of obligation."


"For now," a voice answered, echoing oddly and so distorted I couldn't decide if it were human or not, or guess at the gender. "Go now."


The elemental didn't pause as he spun and ran away, each step thudding against the ground. I had the feeling the elemental feared this cloaked figure he'd left me behind to face. I saw the thing take a step closer to me and I could see an odd pattern on the hem of the cloak, a dark design against an almost equally dark cloth. But as I watched, the design seemed to change and move and watching made me ill. I closed my eyes again since there was no where else I could look.


The wind grew stronger for a moment, then calmed slightly. Rain drenched the ground, and I feared I would drown here in the mud so I turned my head, gasping slightly. The world seemed darker than it should be, and cold.


"Who are you?" the voice demanded from above me.


Before I could say more than my name, a pain so sharp it took my breath away swept through my head. I gasped and fought not to call out or curse.


"Who are you?" the voice demanded again.


I had no other answer. I said nothing.


"I came through the gate to escape to Elsewhere," I said. "I never meant to hide anything."


For some reason, this little statement brought a little gasp of surprise. "Truth."


"Yes," I said. I tried to lift my head, but all I could see was more of the cloak and the moving threads. I dropped down to the soft ground again. My head pounded even worse now. And I was here alone, without Edmond, Maggie or Davis to help see me through the danger.


However, the storm had finally eased.


"Mark," I said and held my breath fearing the attack again. Nothing happened this time. "Mark Davis."


The creature remained silent for a long moment. I thought I could hear breathing, the sound coming in gasps I thought it tried to hide. Perhaps the magic wore him down. Maybe he'd grow tired of this game and go away. I could rest here in the grass, silent and still. I could dare to hope, even knowing how futile that emotion would be right now.


"I cannot leave an enemy, even one who does not know --"


The thing spoke with such power that every sound stopped within several yards of us stopped, even though I could hear the wind in the trees not far away. I tried to move, but the weight on my back remained. Nothing good would happen here and I held my breath when I saw the cloak moving, a step closer. I watched, aware that it had begun to kneel. I closed my eyes. Nothing I could do.


Then I heard someone call my name.


"Do not think yourself safe. She is no challenge to my powers. Shall we let her get closer?"


He shouldn't have mocked me and threatened Maggie. I think I would have given up until I heard those words and feared harm would come to my cousin if I didn't act. I'd thought I couldn't move, but when I saw the cloak shift movement, I forced my arm out from under the weight that held me down and grabbed at it, intending to do nothing more than pull the creature down.


My hand grabbed fire and ice, a shock of pain that would have made me pull back if I hadn't heard Maggie call my name. The silence that the creature had called down gave way as he shouted in pain and fear.


I could touch something solid within the cloak. I tried to grab, but the thing pulled away in such haste that he almost fell. The weight on my back lessened, though didn't disappear entirely. I still managed to move --


"Too powerful!" The voice sounded panicked, and I was beginning to think panicked was worse than before. I could feel magic building around him.


"Mark!" Maggie shouted, and so close that I suspected she could see me now. That put her in danger. I tried to stand and throw myself at the creature. I only made it as far as my knees before the black of the cloak swirled around me like a cave opening . . . And I was lost in the darkness and the cold.