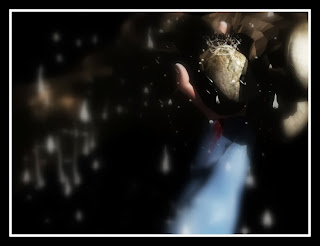 
Panic swept through me as I hit the mud and debris outside the door, sprawling on my hands and knees. The fury of the storm saved me; the Earth Elemental clinging to the cottage had not heard me, yet.


I tried to get up, but slipped again in the rain and wind. Not having the walls of the cottage to protect me proved a problem. I had also dropped the limb I had used as a weapon, though there were plenty more of them around. I scrambled towards a likely looking one as fast as I could.


I heard the difference in the sound from the Earth Elemental, and wasn't surprised when I looked back and realized he knew I was outside. He spun at the same time Edmond leaped and dug into his shoulder with all claws. The creature hit the ground with a solid thump of his huge, overgrown feet.


The Elemental suddenly yipped in surprise and pain. The creature had the face of a bat, I thought. Flat nosed, huge eyes that blinked in what seemed to be surprise more than anger, and rather blunt teeth when it opened the mouth to shout. He'd reached for Edmond, but the cat had caught hold of the scraggly, root-like hair, and scrambled to the back of the creature's neck.


He started to slap at Edmond, and I imagined the cat flattened by one of those blows. That wasn't going to happen if I could get the creature's attention. So I grabbed my branch and darted straight in, daring the long-limbed arms and huge hands as I hit the creature across the knee.


Oh yes, I had his attention. He leapt up and down on one foot for a moment and then one of the huge hands grabbed at me. I dropped and rolled under the grasping fingers, barely avoiding getting caught. The fingernails were at least blunt, I realized. Otherwise even a small swipe would have cut me open.


I didn't know what Edmond was doing now, but the elemental shook his head violently, apparently annoyed more than in pain. I briefly saw Edmond amidst the creature's hair, holding on as he bounced from one side to the other.


If I stopped to think about anything, I would have been terrified. A day ago I was safe in the real world, with no idea of the horrible things out there waiting for me. I wished I could go back and not have headed into the woods. What good had it done? Mary Hale was already dead.


But maybe someone else wouldn't be since I stopped Tommy.


I didn't allow myself more than a moment of contemplation, except to wonder if facing Sheriff Creston would have been so bad. Maybe I could have talked him into not shooting me, right?


I raced forward with my branch, but this time the creature was ready for me. I started to swing, watching the hand coming for me -- but the creature appeared to be ambidextrous. He swept forward and caught me as I tried to pull back. In a moment I was dangling a couple yards above the ground and at an awkward angle to swing the limb in the other hand, though I tried.


Edmond daringly attempted to reach me by climbing down the creatures huge, bulging arm, but one violent shake nearly wrenched my shoulder out of place and sent the cat flying. I managed to turn my head to see him land in the mud, stagger to his feet, and come at us again.


By then, though, the Earth Elemental had already turned and with his prize in hand -- me -- had started heading away from the cottage. The storm nearly blinded me with rain and wind, but he didn't seem to feel anything at all. I looked back with a painful twist of my head and saw Edmond bounding along behind us, though quickly losing ground.


I did not want to go with the elemental. I thought I might have a chance to get away if I could slip my fingers out of his rock-hard hold, though that didn't seem likely. At least he didn't have hold of the arm where I'd been shot. That hurt bad enough still all on its own.


I needed to think, which was difficult to do while the creature jogged along carrying me like a rag doll. The creature's long-legged gait took us quickly away from the ruins of the cottage (I felt badly about the damage) and off towards a stand of trees that were bowing in the wind. I started to fight harder until we crossed a brook swollen from the sudden storm. The elemental had trouble getting across as the water rushed up to his knees and even caught at my feet. I feared if he dropped now, I was going to drown before I got myself sorted out.


I hoped Edmond didn't try to cross the raging water. I twisted again as he climbed up the bank and saw the cat coming to a sliding stop on the other side of the water. Edmond howled and the creature that had hold of me gave a muffled laugh.


I had dropped the limb somewhere along the way. Now I tried hitting at the fingers in hopes I could make the hold loosen and I could slide out of his hand. Yeah, it was a great plan, right? Well, it was the only plan I had and that was better than none at all, I thought.


The creature growled something that might have been a word. The storm was grew stronger as we neared the trees and I thought even the elemental looked around with a touch of worry.


Worse? I was beyond thinking things could get worse until I saw someone in a dark, hooded cloak coming towards us. I knew I faced an enemy even before the Elemental bowed.