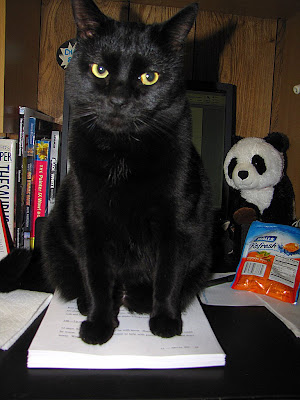 I did well this year, despite a lot of hell, including the death of my poor Willow kitty. And of course, the first of the major holidays came and went with me alone for the fourth year. So yes, of course I threw myself fully and completely into NaNo. It was fun, it was exciting -- and it took every single free moment I had. What more could I ask for?

I wrote three novels and one shorter, related piece that will be attached to one of the books in the series. The books are all in the Devlin Team Series -- Welcome to Forest, Farewell to Summer and Plague. The short piece recounts how Devlin became an IWCS agent and was just something that came out of nowhere and I knew I had to write. That one turned out to be considerable fun.

And to paraphrase Edgar Allen Poe:

THANK Heaven! the crisis—
The danger is past,
And the fever called 'NaNo'
Is conquer'd at last

I did not do a lot of posting during NaNo this year. The reason was that every time I started to, it seemed like something else was going wrong in Real Life and I just didn't want to talk about it. So I would go back and write some more on the novels instead -- and now I have three lovely new novels for the Devlin series.

Now it's back to all those things I dropped on November 1 -- Joomla! Being at the top of the list. I need to figure out more about it. I was doing well, but the month of intense writing has pretty much cleared everything else out of my thoughts. Time to get stuff lined up and going again!

This is a good month for me to do it. I want to be prepared for 2011. I have a novel idea for next year and I'm getting it worked out this month. And other things. And more things.

Just so long as I can keep busy and not really think much about the holidays, I'll be fine.

Wow on your word count! Congrats!!!!!

Sorry to hear about Willow. Give the other kitties an extra big hug.

Congrats on all the words and finishing three full novels and a short. Yay!