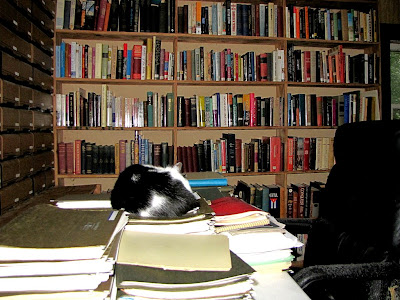 A couple years ago I started reading the Britannica Great Books and taking notes. Those first notes grew into the background material for Draw the Line, a science fiction novel I wrote back into 2009. It worked VERY well.

I stopped reading for a while, though. Part of that is because of an eye problem and the small print. But I picked it back up a few weeks ago. I had already started doing notes for a new fantasy book, so I read through those and then started moving on.

This is working really well for me. I choose a line that draws my attention in the play, comment on it and the play in general, and then warp that thought into some sort of inspiration for my new story. This is how it works:

I have been reading a play a night, basically. I'm not sure how long I can keep that up -- the print is so damned small and my sight is not good. The plays are short and, well -- I admit it -- they are fascinating. And that's good. I need to read more things like this. And apparently I will be for a while.

Death hath oped his gates for him, and that this is his last look upon the light.


First, can I say how much I really disliked this particular play? The only good character, Phaedra, still does something despicable at her death. Yeah, yeah -- it's all because of the gods and everything, but still -- it's really hard to feel sorry for any of them by the end of the play. Hippolytus is a pain in the ass. The nurse is untrustworthy. Theseus is stupid for not even trying to find out the truth. Yes, yes, yes -- all of them set up by the Gods. And it probably felt more 'real' to the audience of the time. But it's really hard to like any of them.

But, okay, let's move on and apply this to the prince in my story. Have you noticed how almost all the Euripides' plays deal with death? Handy for me, but I suspect I'm going to have trouble with I get through Euripides and on to Aristophanes.

Okay, but this -- this has me wondering about something. If my prince has looked at death, can he see the real world again as it really is? Has it, in some ways, made him blind? I don't want him to be completely blind, but maybe there are 'things' in the way, making it difficult -- and dangerous -- for him?

But does that sight also bring him 'gifts' that helps him to fight an evil others can't see at all yet? Is that half the reason they think he's crazy?

You know, I am starting to see this as a first person POV, which surprises me. I'm not sure that would be right. I want the others. So maybe first person for him and third for others? I've read books like that and found them well done.

That's something for the future. But this has given me another piece to consider for the story. I wonder how much of this material I'll be able to fit in by the end.


So there is how it basically works for me. Just a little nudge of a thought, and see where it goes. It generally goes in ways I would not have thought of without the nudge, obviously. That makes it all the more interesting for me to work with. And the good thing is that you can use almost any kind of writing for this type of work. I happen to be reading Greek Plays, so those are what I'm using for the base. Eventually, I'll be reading something else. I hope to keep up this work even then, though.

I have to say, I am damn jealous of the room you have in that picture.

But, back to the topic at hand, I agree with how Phaedra is hard to like. Though, in my case, that feeling is also clouded with my feelings of Seneca (I read Seneca's Phaedra in second year Latin, and I've been told it's generally considered to be graduate-level work).

Maybe hearing your ideas from the plays like this will help encourage me to get back to reading (and rereading) some of the plays and novels up on my own shelves.