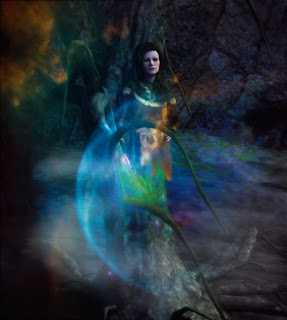 I hadn't returned to the Faelands in many years.  My heartbeat faster as I opened the way, and I saw Lycan give me a quick frown.  He could sense heartbeats, but I didn't think he'd understand my feelings as I stepped through and into the world I'd longed to see again for years.

Have you ever gone home, walked into your house, and simply felt that something was wrong, even though you couldn't put your finger on it right away?

I was already waving the others to step back.  That almost got me killed since I should have been paying better attention to the area around me rather than worrying about my companions.

"Down!" King Pixie shouted in my ear.

I did as he said, just as something large bounded over me.  Sylph and Lycan leapt aside, but Lady Snow simply changed and went from being a large woman to a substantial polar bear again.

The troll couldn't stop in time.

I scrambled out of the way with King Pixies still holding tight to my shoulder.    By the time I got back to my feet, one troll had died, and several others were running as fast as they could.

I hadn't clearly seen the troll until I turned, and by then, it was already in pieces. Lady Snow was kicking those aside with such ferocity that the head itself disappeared over a low mound several yards away.

"We have to leave!" I shouted.  "Someone has a watch for others entering the Faelands.  That guard arrived too quickly, and others are going to follow."

"Or they plan to slow us down some other way," Sylph said.  She lifted her head into a sudden breeze, and that dangerous hair of hers swept around so quickly that I threw myself back down on the ground.  "Snow is coming."

"Let it come!" Lady Snow shouted into the growing wind. She dropped with her belly in the snow.  "Climb up.  Hold on."

That seemed like a wise idea because the wind already held ice that hit like pellets of stone.  Cold pellets.

"King Pixie, into my vest pocket," I said.  I wanted to be more polite, but my teeth were chattering.  Besides, he lost his hold, and I barely caught him before he fell to the ground, his wings already coated in ice.

I put him in my pocket as carefully as I could, feeling a cold spot on my chest -- but then he moved a little and relieved me of some of my worries.  Lycan began scrambling up to Lady Snow's back, and Sylph followed.  Then she reached down with an elongated arm and pulled me up to sit between her and Lycan.  I was glad not to be behind her and worry about that hair -- well, not until the wind changed.

Lady Snow began moving, and she did head straight into the wind running for the heart of the storm.  And yes, she could run well.  We held on, but I mostly feared the cold and wind more than her movement.  She was, after all, magical and had no trouble moving through the worsening weather.  Her fur was warm and plush, and if I hadn't worried so much about our lives, I would have closed my eyes and napped for a little bit.

I tried to get some idea of where we might be headed.  I was fae, after all, and this was my homeland.  The storm, though, seemed to blur all links with the land.  I could feel little beyond the ice and magic-infused storm.

Which meant that I had no choice but to let Lady Snow take us straight toward the enemy.  Maybe even the surprise of it would help us.  I was certainly surprised -- and I wondered if Lady Snow even realized what she was doing now.  She had stopped to gather us up, but after that action, I think her mind turned entirely toward the enemy, and she just let herself go.

I might have tried to stop or slow her, but I wasn't sure the four of us would survive the encounter.

I tried to think of something else helpful -- but suddenly, we were out of time.

We were also out of the storm.

It was like stepping through a wall from a freezer into spring.  The shock alone got a violent tremble from my body, but Sylph held me in place while Lady Snow made a swift stop and turn that almost unsettled all of us.

I looked back to see the wall of snow -- and someone in a long robe and hooded robe with hands lifted.  The hands suddenly dropped, and the storm began to die away.

"Well, damn," the woman said with barely a glance at us.

And then she disappeared.

I had been ready for an attack and held the magic in my hands for a moment longer.  The storm had all but died already, leaving only a line of demarcation with melting white on one side and bright green grass on the other.

Lady Snow turned back to human and then sat on the ground, panting.  "Where did she go?" she demanded.

"Why did she go?" Sylph asked, which was a question I was more willing to try to answer.

"I don't think she expected us," I said.  I sat down by Lady Snow and leaned back on an elbow, trying to calm myself and my companions.   "That storm wasn't intended as an attack against us."

"No?" Lycan asked.  Then he nodded.  "That was a lowland troll.  "A storm like that would have frozen and killed him -- but we killed him first."

"Then why did she run?" Sylph asked with an annoyed twitch of her shoulders.  She and Lady Snow still wanted a battle.