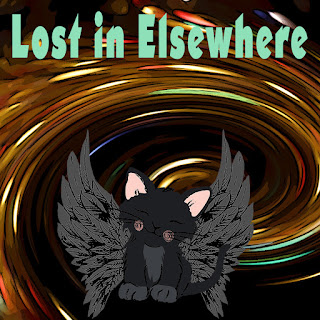 Welcome to the new adventures of Mark, Maggie, and Edmond the talking cat.  There are three sets of adventures on the Joyously Prolific Blog.  You can find them by searching for Surviving Elsewhere, Journey to Somewhere Else, and Saving Elsewhere -- or you can find the entire set here: Tales from Elsewhere -- and you can buy the book for $1.99 with this coupon code WN38F (not case-sensitive) which you enter prior to completing their checkout.  (Good until December 31, 2020 -- pass it around to your friends!)

"Lord Snow!" Maggie yelled, panic at the edge of her voice.

I felt much the same way, but I couldn't quite get my breath to yell -- and that might have been a good thing.

I heard the word over Maggie's shouts and grabbed her arm.  "Listen!"

"Be careful up there!"

That gave me a good idea of where Lord Snow had gone. I dropped onto my knees and carefully crawled forward, signaling the others -- including Edmond -- to stay back.

The opening was about twelve feet across and irregular.  Another foot of it broke off as I neared, and I stopped with my heart pounding.

"Slowly, Mark," Lord Snow said from somewhere below me.  Far below me.

I inched forward and looked down.

Lord Snow sat on a ramp of ice about fifty feet below.  Pieces of the snowbank sat all around him.  He looked annoyed.

"Ah, there you are," Lord Snow said.  He shook snow from his fur.  "Well, this is embarrassing. I was actually trying to find an opening into a burrow.  I did not intend to drop in like that, though."

"Burrow?" I asked. Paths led off to different areas, all of them made of translucent ice.  It looked slick.

"Probably an ice spider," Lord Snow said with a twitch of his ears.  Not a happy cat.  "The question is whether you come down here and join me or not."

"Ice spider?" I said and thought maybe I ought to back away from the opening, especially since part of it cracked and fell away.

"Ice spiders are annoying, and they can be dangerous -- but I don't think you want to be up there on the flat plane when night comes and the winds blow."

I hadn't considered storms, even though I had noted that the breeze was a bit brisker now.  Wind?  There was nowhere to take shelter, except down.

"Down," she said and with a glance around the bleak landscape.  I felt nervous about all the things we could not see ... but I could hear the sound of the wind starting to roar in the distance.  "Edmond, you go first.  The wind is picking up."

"You expect me to jump into some spider -- oh."

A gust of wind caught Edmond and slid him back a couple inches.  He scurried forward and dropped down over the edge with hardly a pause.  I watched Edmond land and slide a few feet before Lord Snow snagged him.  Edmond nestled in close to the larger cat.

"Waiting for a break in the wind," she said, her metal wings fluttering a bit.  "You should --"

"You and Five go first," I said.  "Don't worry -- this snowbank isn't going to hold up much longer anyway!"

Maggie lifted on her wings, flapping them rather frantically as she slipped over the opening and then dropped the last couple feet.  Five let out a sound of delight.  We'd have to find her a rollercoaster.

I slid forward, trying to let my feet down first --

The snowbank tore free, and I tumbled, snow and ice falling with me.

I hit the ice path more on my side than my face, which was good.  I didn't need a broken nose. Then snow fell over me.  And then more snow.  I thought I could hear the others yelling frantically, probably telling me to move -- but that wasn't exactly possible.    Snow is light and fluffy in the air, but once it hits the ground -- and piles up -- it might as well be made of lead.  One arm was pinned under me, and the other was quickly weighed down beneath snow.  I tried to wriggle that one free, aware that there was little air to breathe, and everything was damned cold.

Distant voices.  I tried to call out, but that meant breathing in snow.  Panic helped, though.  I got my arm free with a wrench and tried to push the snow away -- and it worked, at least a little.  I was able to breathe just a bit of icy air -- but more air than snow this time.  I pushed more out of the way, but it was starting to compact, not melt.

Cold.  Colder than I had ever been.

Glad Edmond wasn't with me.

I tried to push a little more, but then thought maybe being still might help more.  Be still and quiet. --

Maggie's voice called me back to the danger.  I tried to move, but everything felt too heavy.  There wasn't much air, either.

"I think I can hear him.  I'll try to use a little magic.  Stay back, Lord Snow. We would have a hell of a time dragging you out of the snow."

I knew that was true, too, because I could clearly hear their voices, and I thought I saw a bit of a shadow overhead.  With a force of will, I shoved his arm upward --

"There he is!" Maggie shouted.  She grabbed my hand -- had to be her, since she was the only human -- and I felt a surge of warm magic and heard the frantic beat of her wings.  Maggie was lifting me up out of the snow that fell cascading away from me.  I'd dropped much farther than the others, probably breaking through the ice where they had stood.  I could barely see Edmond and Five up on the higher shelf.  Lord Snow was gingerly making his way up along the edge, but even as I watched, some of that snow fell away.  He barely scrambled upward in time.