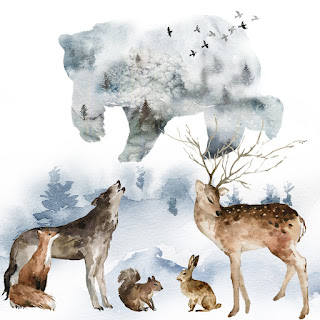 The wind changed; what had been a pleasant autumn breeze through the pines shifted without warning to a cold northerly blast of Arctic cold.  Lee stared into the wind for a moment, his eyes narrowed against the cold.  He'd hoped to go farther, but he wasn't stupid enough to risk a winter storm in the Sierras.

So, no third night out in the woods.  With a shrug of his shoulders, Lee resettled his backpack and turned to return the way he had come.  Despite always feeling a draw to the wild places, he was no fool.  He would not risk staying with the weather making so drastic a change.

He remembered a side trail about four miles away that he'd take going back, a new path into trees and rocks he'd never seen before.  The trail would add about five miles in length to his trip, but ran mostly downhill from what he'd seen on the topography maps.

The wind continued at a steady blow, a soft moan through the trees, a bitter edge of cold that made him stop and pull out warmer coverings. He hadn't gone into the woods for a few days without preparing for cold weather.  Snow could hit even in summer.

Just as he was pulling on his hoodie -- he heard music.

Not just music, but someone singing.

Lee had only rarely met others out on the trails.  He chose the primitive wilderness areas for a reason, and it wasn't to share the peace and solitude with day-trippers into the edges of the forests.  He had certainly never heard anyone singing -- a woman's voice, he thought, though she had an odd range.

He didn't recognize the language.

Lee listened -- he wasn't certain for how long with the wind blowing colder and him without gloves on.  When the music stopped, Lee felt a chill that had nothing to do with the cold.  What he had heard had been ... he wanted to say unnatural, but perhaps it had been too much of nature.  Lee had the odd feeling that humans had not been meant to hear those sounds.

His fingers felt stiff, and bits of ice clung to his clothing.  He shoved his hands into his gloves, having trouble even with that little action.  His legs didn't want to move, and he almost walked away without his backpack.

A wolf moved past Lee on the path, glanced his way, and kept going.  Two more followed.  Lee stood still in shock rather than fear.   Other creatures began to move around him -- birds from the trees, rabbits and squirrels, a half dozen deer.  They all headed in one direction.

Lee started to walk away, moving at a near jog, avoiding more creatures that only looked askance at him as he headed in the opposite direction.  Kept going --

But at some point, Lee had stopped and turned and didn't even realize he'd started heading toward the music like every other living thing around him.  Lee tried to fight the draw, but the music called ... it called even to him.

The third time Lee gave in to the lure and went with the rest of the creatures along the path that led to a natural stone pavilion up against a mountainside.  Animals had gathered along the edge, settled in twos and threes of their own kind:  deer, fox, rabbit, elk, wolves, and dozens of types of birds.

Standing before them, with a large cave at her back, stood a huge brown bear, swaying hypnotically on her back legs -- and the bear sang.  Lee should not have known what she said because it wasn't a human language, no.  The beautiful tale she told, though, was one with nature, and for that moment, he stood there with the others and understood.

She bade farewell to the fruitful summer and welcomed the long rest of winter.  She named each of the creatures by their true names, and she blessed them all, each one in turn --

And found him standing at the edge of her grounds.  Her massive brown paw raised, the claws catching the glint of the light as clouds moved in overhead, and the first snow fell.

Lee did not fear her.

"You should not be here," Bear said, but there was no hint of anger or menace in the words.  "I should have felt a human in the woods, and yet you are so akin to nature."

The dark brown eyes stared at him, blinking.  Lee still didn't feel afraid.  None of the other creatures had done more than turn to glance at him, as though he belonged as much as any of them.

"What do you want, human?" the bear asked.

Lee sat, and he listened, long into the dark, cold night until he drifted to sleep.

Two days later, Forest Rangers found him asleep in the arm of a fallen tree, covered in his blanket and warm.  Lee awoke, startled first by the humans, and then because he was not still on the mountainside with the others.

"We knew you'd make it back out," Dan said.  They'd met more than once went he headed up into the wilderness.  "But take a look at those prints!  That bear must have come damned close, Lee!"

"And that was after you bedded down," Mark added.  "Not a single print from you, so the storm blew in afterward.  There are even a couple wolf prints not far away."

Lee looked back at the prints after they helped him over the broken tree.

"I think you were damned lucky, Lee," Dan said.

"Very lucky," Lee agreed, but they were not speaking of the same things, and this was his secret to hold.  He'd be back though to listen for the song on the wind when the seasons changed again.
Posted by Zette at 12/13/2019 12:42:00 AM

Thank you, your article is very good