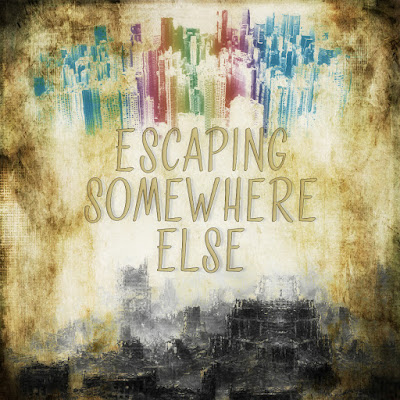 (Previous)
I flew.  I didn't much like it.
Edmond had dug deeper into my jacket, which was good, despite the claws holding on to my shirt and skin.  We were moving through the air and I couldn't begin to tell how far we had gone already, but there was no lessening of the wind.  I went too close by walls that rose up into the sky, scraping a foot along one and losing a shoe.
And sometimes I could see a pair of huge, glowing eyes in the cloud, watching me.
Down.  I needed down.
The thing was coming closer.  A huge claw swept out and would have had us if I hadn't suddenly twisted and pushed downward, as though in water.  Swim -- one arm holding to Edmond, but still swim.  Dangerous -- I was soon down amid more of the buildings, but the wind had less strength here.  I swept down lower and aimed for a breach between two walls, and then swept to the right.  The wall blocked most of the wind.
We dropped.
It was only a few feet, but I landed hard on his side against a pile of bricks.  I hadn't the breath left to even moan.  Edmond didn't move and we laid their, silent and still, while something swept over head, yowling in anger and frustration.  Edmond shivered.  So did I.
Gradually the night came, cold and dark.  The wind had gone.  I listened, hoping for the sound of others.  Small things moved around them, but nothing large enough to be human.
"Safe," I whispered.
"There is no where safe," Edmond mumbled into my shirt.  "This place is insane.  None of it makes sense."
I gave a nod of agreement and finally started to sit up. Edmond popped his head out and looked around.  Then he pulled his head back in and made sounds that were probably cat curses.
"I have no idea where we are," I said.
"We're lost in hell."
"We need to get back to the others."  I started to stand, but everything ached.
"Not tonight, Mark," Edmond said.  "Wait until light.  Even I wouldn't go wandering around in the dark tonight.  We need light to see if we can spot anything.  And we need sleep. Flying was very tiring."
"We need to move at least a little away from here in case whatever that was comes back looking for us," I said.  I did manage to stand this time.  The loss of the shoe was going to be a problem.  The rocks everywhere hurt.  I cursed, too -- but I took us back through the breach in the walls and then off to the left a little.  I thought that had been the way we came.
I did not look up at the city, though I was grateful for the little bit of light it cast.  I concentrated on my footing, on the shadows, and kept thoughts of what hung over us to a minimum.  It was impossible not to have some thoughts -- Don't think about a pink elephant! -- because the mind just doesn't work that way.  I had to give myself other things to consider.
And those were enough to worry me.  Lost.  Injured, though not so much that I couldn't move.  Something out there, maybe hunting me.
"Is this far enough?" Edmond asked.  He was limping as well.
I would have kept walking, but that wasn't what we needed.  I grunted agreement and sat down on a fallen boulder.  "Sleep for a while, Edmond.  I'll stay awake."
He jumped up into my lap and made himself comfortable.  "This way I'll know if you fall asleep," he said.
I wanted to complain, but it was entirely reasonable.  Edmond, being a cat, had no trouble falling asleep, either.
I wasn't certain I would ever sleep again.  Everything, from the moment I had killed the monster Tommy Creston had become and all the way to this flying lesson.
I was angry.  I was furious.  I had done the right thing by taking care of the monster at home and all it had gotten me was a hellish amount of walking punctuated by things knocking me around.  Everything I knew about myself had changed.  I was a Protector, but so far that hadn't done us a lot of good.  It sure hadn't gotten me anything better and I was tired of it all.
"If you start growling, I'm going to go find somewhere else to sleep," Edmond said.  "Sit still."
I almost snapped at him, but I held that anger inside.
"That's better."
He went back to sleep.
The night stayed quiet, which I supposed was good.  I didn't hear so much as a breeze now.  I imagined nothing willingly moved out there tonight.  We each kept our silent vigils.
The world calmed.  I calmed.  Edmond slept.
And then I heard things coming.  Little things that grew louder, like the clicking of tiny metal teeth against stone.  The sound grated and I stood, my hands in fists.
"Leave me the hell alone!"
The clicking went silent.
"Well, okay," a woman said somewhere close by.  "I can leave.  But I really thought you might like to get to cover before the biters get here."
I spun.  The woman was standing by a window, faintly outlined by the light.  Dressed in black an gray, her face lost behind a huge cowl . . . She could have been there all along.
Edmond had backed up to me, but he didn't seem particularly upset.
"I'm sorry.  I didn't see you there," I said.  Friend?  Foe?
The clicking noise started up again.  Closer.  I automatically picked Edmond up.
"I think we better go," the woman said.  "Fast.  They're going to be hunting."
That didn't sound good at all.  I looked at Edmond.  He gave a little nod.  So I bowed my head to this stranger and followed her, limping over the stone.  Another adventure, I told myself.  Another adventure to survive.