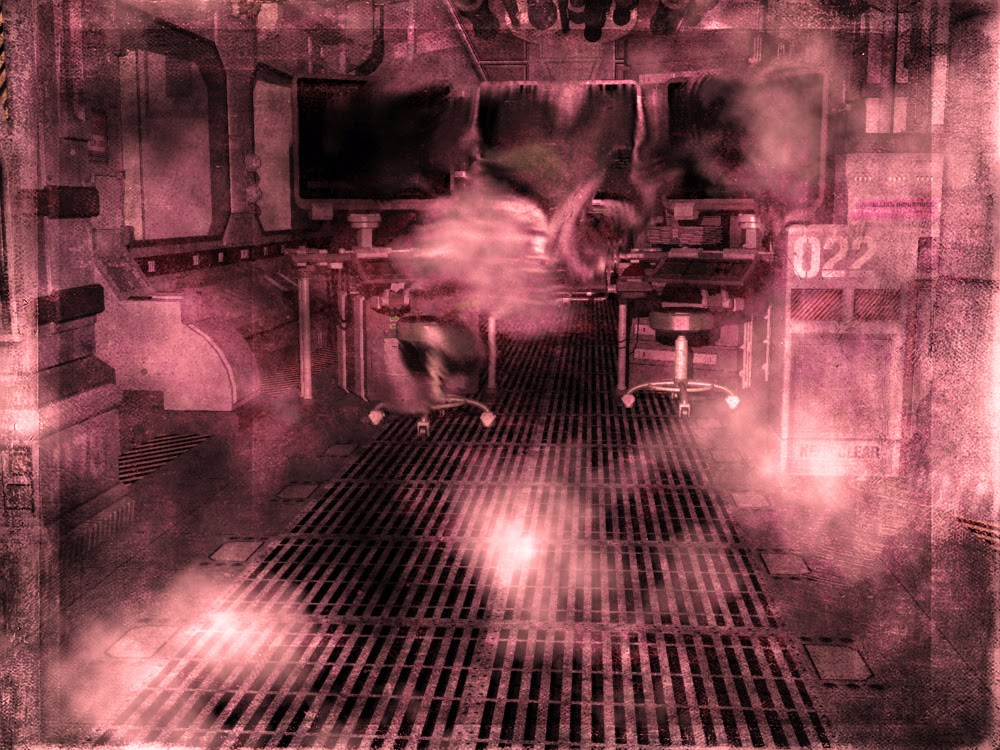 Something was wrong on Tengas Outpost.

If something odd went wrong on the Belgium's route, Tana and her crew investigated. She wanted to believe they got the jobs because they were good at handling them. However, she feared they were sent because someone wanted to get rid of her Catchin crewmate, Lisil, and willingly risked the two humans with him. Lisil was tall and furry and tended to hiss when he got especially upset. He also had nerves of steel and incredible reflexes. They often survived because the Catchin could react faster than a human. Humans, though, had their uses. Catchins didn't fly well together. They had to crew with humans.
The flight proved long and boring until the outpost came into sight. A werecraft had crashed into the far side of the building and the back half of the alien ship had left a line of twisted, burnt metal and other debris spread against the dull yellow landscape.
"Reading heat sources in the outpost," Lis said, ears pricked back. "At least one more than there should be. I'd say they have visitors."
"Are there any humans left? Because if not, we'll pass on a visit."
Lisel ran the scanner, ran it again -- and then sat back in the chair. "I can't tell."
"Well, hell," Krisin said from his spot behind them. "I'll start getting the weapons out."
He knew they were going in. They could go back to Belgium and get a force to help, but if any humans were holding off the enemy, time would not be on their side.
If the weres understood anything about humans and Catchins, they didn't like what they'd learned. Werecraft raided human settlements and outposts near the boundary to their own worlds. Humans, in a rare show of sanity, had not yet crossed over that boundary and attacked the ten thousand or so worlds on the other side of the line, but they did want to keep watch, so outposts and ships stayed in the area.
Earthers had even created specialized warriors in case of war: Catchin. Someone, however, had realized having such warriors in any number would also put the humans in danger from their own creations. Again, some previously unknown sign of sanity intervened and the Catchin were simply turned loose to work with humans.
She was damned glad to have one now.
The werecraft had not damaged the landing pad or airlock. There was no use trying to be subtle about this. Tana brought the scout down with a quick, no-nonsense landing, let the tube connect and kicked the door open. Lis was the first out and she followed. Krisin came last, dragging out a big laser rifle while she and Lis carried pistols. "Careful where you aim that thing," she ordered. "Remember we have a poisonous atmosphere."
Krisin grunted, putting the rifle on his shoulder. Maybe she and Lis ought to walk behind him.
The airlock opened into an area filled with the smell of smoke and burnt plastic. The main control room, into which they walked, showed equipment partly melted. The alien craft had hit the far end of the end of the complex near the power station and the power surge had been destructive. The outpost was on emergency power, the red light annoying.
"Let's make this quick," Lis said. He kept his eyes on the far archway. "How do we search to find out if there are humans left?"
"Hey!" Tana yelled. It wasn't a large outpost. "Any humans here?"
Lis and Krisin both made sounds of disbelief. Tana listened. There was no way the weres couldn't have missed their landing anyway.
The lights blinked several times.
"Is that you?"
It blinked twice.
"The human has to be near the generator. Here." He pointed to a spot on his pocketcomp. The other seven spots were close to the same area. "Be ready."
They started out at a brisk walk. Lisel held the pocketcomp in his left hand, glancing at the screen sometimes. They passed one dead human and another, and then three dead weres, the bodies withered and stinking. The place was too quiet except for an unnatural gurgling noise somewhere ahead. Lis only gave a nod of warning. They'd found the enemy.
Tana had never fought a were except with her ship. She didn't like facing them here, but when the tall, ungainly creatures appeared, Lis fired and took down two and she got one, while Krisin didn't fire off his weapon at all, which was just as well.
"Let's go!" Tana shouted. A face appeared at the door ahead. "Any more humans?"
"No!" The woman darted out of the room. Short dark hair, dark skin and brown eyes that narrowed at the sight of Lis, but she wisely said nothing. They ran back to the airlock which seemed to take far too long to cycle and open. Sounds made it plain others were coming after them.
"I think we're done here, right?" Krisin said as the airlock opened..
"Yes," Tana agreed. Lis jogged ahead to get the scout open.
"Good." Krisin fired back into the building . . . at the ceiling.
The outpost began collapsing before she got the scout up. Their passenger sat crowded onto a little bench to the right. If there had been more than one human to take out, they'd have had a hellish time fitting them into the craft, but she would have done it.
"We have werecraft readings," Lis warned, one claw tapping the screen. "Time to go."
"The Catchin isn't going to fly, is it?" the woman demanded.
The scout wasn't large. Krisin pulled out of the way in haste as Tana reached back and caught the woman by her collar. "Unless you want to walk home, I suggest you be polite. Lis just helped save your life."
"I thought -- I didn't know --"
Tana let go.
They had a quiet, boring trip back to the ship.
Tana began considering going pirate to get away from the fools.

I think there is a lot I don't understand, but I would like to know more. Exciting story.