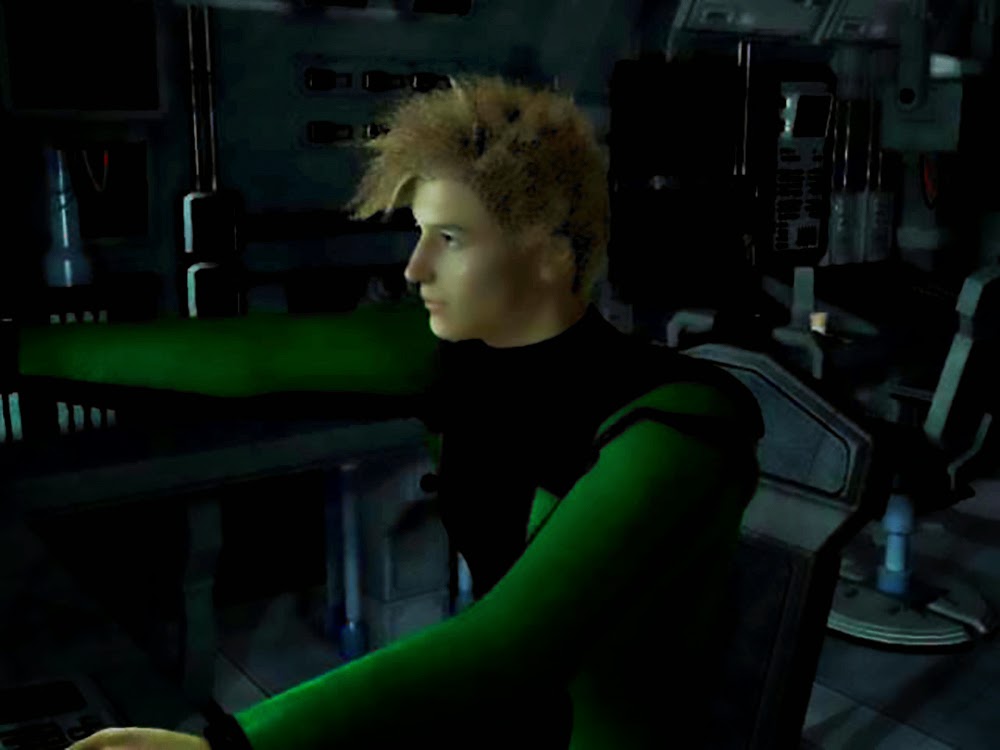 Izain ran the sequence through his mind again as he stared blankly at the screen before him. The random numbers there had nothing to do with what he thought about, but everything to do with survival. Once the shark code finished running through the ship's computers, they'd be dead in space and the hunter that had infected them would come in and round up crew and passengers for sale and strip out whatever they needed.

Izain knew what was happening in the computer and how the shark code worked, having run on the other side for a while. No one on the Quest knew about his less reputable past. They did know he was exceptionally good with computers and that was how he'd gotten a first class spot on a good, new ship. He'd grown tired of living on the edge with people who treated their captives no better than livestock.
He tried to chase away the image of himself as part of that livestock and focus on the code again.
"He's not going to do anything, Captain Lawrence!" Kanda said from the seat beside him. Kanda swung around in his chair and stood. "Why the hell do you think he can save us? He's just going to sit there --"
Kanda shoved at the back of Izain's head.
Izain turned his own chair but didn't stand. "Don't do that."
"To hell with you, boy --"
Captain Lawrence took a step forward and shoved Kanda into his seat. She stood over them both, glaring. "Do something."
Izain turned back to his station. He had the code back again and could almost see --
He felt more of the ship's power start to fail and grimaced. No time to be careful. He reached towards the keyboard.
Kanda caught his arm. "What the hell do you think you are doing!"
"I'm going to save us," Izain replied, pulling free of the man's pudgy hold. Kanda had never been his favorite, and he was fast working his way into the 'if you are this useless, should you live?' category. "Sit still. Watch. You might learn to be a tech if you pay attention."
"You little bastard --"
Kanda reached for him and Izain simply didn't have time. He grabbed Kanda by the wrist and shoved his hand down on the upholstered arm of the chair. Then, with a quick flick of his right wrist, he brought a very sharp permaglass blade into his hand and drove it straight through the back of Kanda's hand and into the chair.
"Shut up and stay still. Don't bother me."
Kanda had gone white. Then he fainted.
"Yeah, that works, too."
"Izain --"
"I have it. I need -- to work."
He frantically typed. There wasn't much time. He hoped he had the key to this code. They changed, but once you found the right link --
The medtech arrived. She went to work on Kanda, saying nothing about the knife and the wound. He caught a glimpse of her in a reflection in the monitor; white-faced and afraid, but steady at her work.
"We don't have much time," Izain said. "I think I have it contained. We need to shut down and then --"
He started shutting down everything he could, doing it in the systematic order that would come with a shark code. Captain Lawrence started to say something,but Kanda awoke with a moan and a curse. Izain was going to be in trouble later -- if they survived --
"You bastard! You're working with them!"
Kanda grabbed the blade from the medtech's hand and shoved it straight into the back of Izain's shoulder before the medtech could put a shot to Kanda's neck and he dropped like a rock. Izain tried to ignore what was happening to his body because if he didn't get this right, they wouldn't survive anyway.
"Captain," he said. She leaned over, her face set in anger. "Closed down everything. Let them think they have us. Wait for them to lock on."
"Lock on," she said shaking her head.
"Lock on," he repeated. "Airlock -- wait until they connect, then blow our lock and run like hell."
She blinked. "Dangerous. That means a flash start for our engine."
"Yes. They'll -- stopped and damage if not ready for airlock to blow."
"Huh. No time to make other decisions."
"Sorry," he said, though he wasn't really. He knew how to handle this one. "Not long. Only this station live. You take it --"
"No, you handle this," she said. "Now isn't the time to hand off the controls and let me second guess what you've set up."
Wiser than some he'd served under. The medtech had numbed the wound, making his shoulder and arm feel funny. His fingers tingled. He watched them to make certain they were doing what he wanted.
The code that had been sharking through their system stopped. His screen went dead, but he'd expected it and already had the other controls in hand. What he hadn't expected was for the station beside him to go live.
"Oh, now that's interesting," he said with a nod. He cut it back to his position. "Need to trace who sat that spot --"
Something thumped against the ship. He watched his screen, read the code, waited for the moment -- and didn't wait for the captain's permission. He did an emergency blow of the airlock and fired the engines at the same time.
The ship shuddered and the engines howled, but they moved and kept moving while he keyed everything back up. The captain gave him a nod, suspicion clear in her face.
The price of doing too well, but at least they'd survived.
Kanda was the one they arrested, though. He'd been paid in advance for planting the shark, and it turned out he'd done it before. Captain Lawrence took Izain back as comp tech. They didn't mention how he knew too much. And she didn't ask him not to carry the permaglass blade.
They were going to do well.