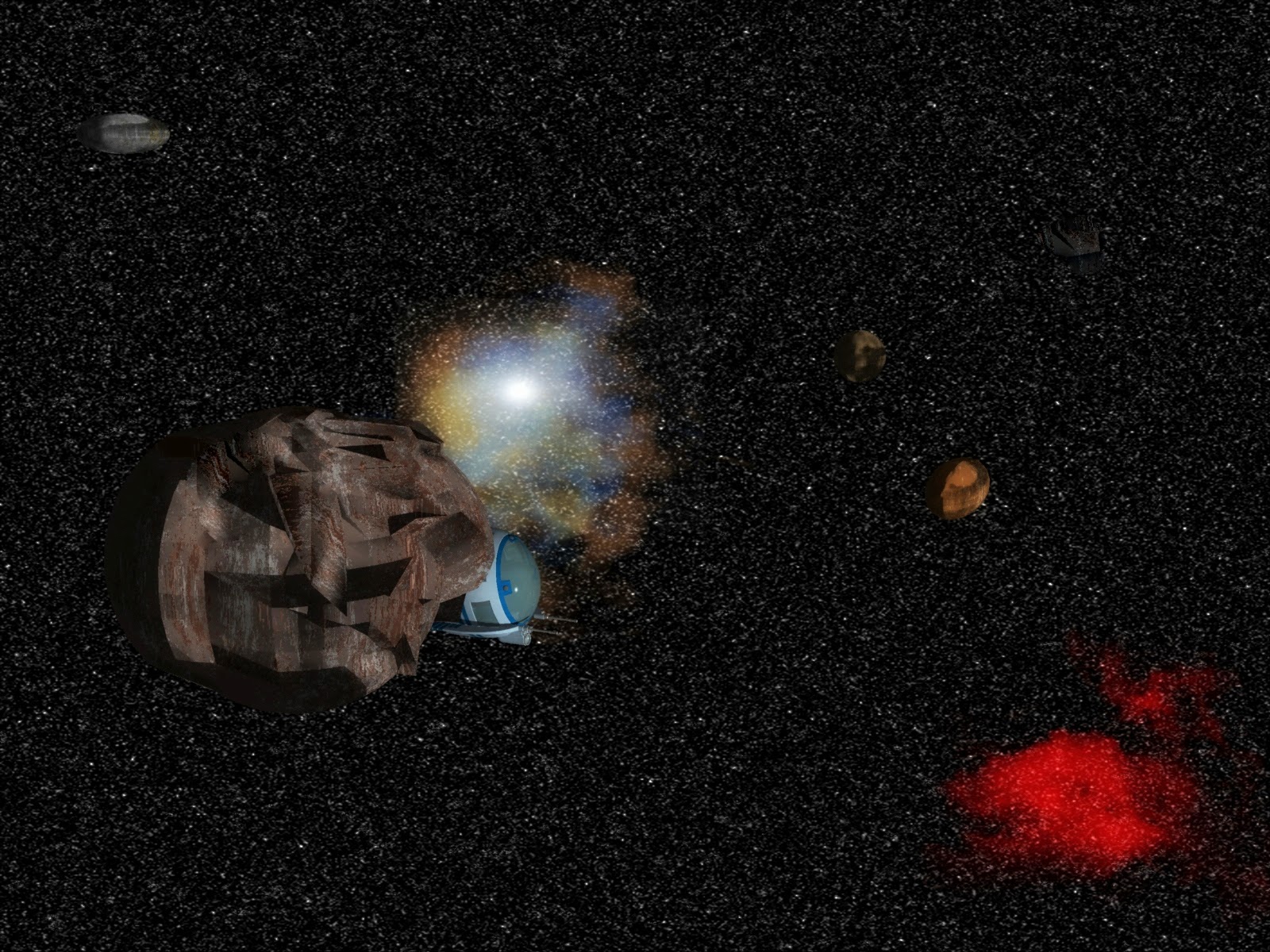 Tana paced in front of the airlock leading to scout ship. She didn't curse; she'd already run out of words half an hour before. Krisin leaned against the wall by the airlock and ignored her, but even he was starting to look annoyed.
"Why can't Daynel ever be on time?" Tana finally demanded, spinning on Krisin as though he would have an answer. "We're going to be late with the launch and Command will dock our pay for this one!"
"Daynel is useless," Krisin said with a lift of his head. His dark eyes narrowed. Tana almost flinched because he wasn't usually so straightforward. "You should have told him launch was an hour earlier."
"I did," Tana replied and won a snort of annoyed amusement from the other member of the team. "If he doesn't show up, so help me God --"
"Daynel isn't coming," someone said. "He called in sick."
A stranger walked up to the airlock, gave the craft a quick look over, and handed a chit to her. "I'm his replacement."
Tana took the chit automatically while her mind rolled through half a dozen new curses.
Not a Catchin. The guy looked like an overgrown tabby with curly long hair on his head and sleek black and grey fur across his face. His green eyes narrowed as he looked at her and his ears pulled back; not a happy cat.
"You can't replace --" she began.
"Yeah, yeah. I've heard it all before," he said with a swipe of his fingers through the air. "You have the chit. This is from Command. So let's just get this over with, okay?"
Tana dropped the chit into her comp; Lisil had a pretty high rating for a second pilot so she gave in to the inevitable. At least they'd launch on time.
Krisin said nothing as Tana unsealed the lock and they climbed into the tiny craft and crawledinto their seats. At least Lisil was smaller than Daynal and didn't purposely sprawl over into her area at the command station.
"Lisil this is Krisin. You listen if he gives an order. We don't stand on rank here." She wondered if she should amend that when it came to him. "The work we do, we had all better be ready to jump if someone sees something wrong."
"Understood," Lisil replied. He began running checks on his boards. Daynal never ran checks. They were required to have three people on board, but Daynal had never been more than dead weight. There were too few second pilots and she'd been stuck with him.
Tana started her own checks. Krisin did his work. They launched on time.
The assignment didn't go well and Lisil wasn't the problem. The trouble was that there were damned werecraft hiding in the asteroid belt where they went to scout.
They were more than half way through the run, nothing out of the ordinary, when Lisel shouted, "Drop power!"
Tana cut the power to the craft without thinking; they went dark, sitting beside a small bit of rock hardly bigger than them.
"What the hell --"
The first werecraft swept by, black and sleek, then two more and then a dozen. Tana held her breath. She'd never seen so many in one location, and the fact they were swarming towards the Belgium was not a good sign.
Lisel hissed, startling her.
"Sorry, sorry." He craned his neck, looking in the direction from which the craft had come. "I saw the movement at the edge of the field. They're running dark. Didn't show up on the scanner."
"Damned quick," Krisin said. "Good work."
Saved their lives. The werecraft would have spotted them and easily destroyed the scout ship.
"I think that's the last of them." Tana didn't power back up yet. "We're too far out to give warning. We need to plot the fastest course back."
Lisel went to work, his long fingers playing across the computer as soon as it came back on. Tana glanced at Krisin.
"I'll be ready." He was already keying on the weapons.
She spun the scout around the asteroid, following the path Lisel laid out. He was daring; they rushed past tumbling rocks and under debris fields, taking a few small hits from rocks, but nothing slowed them down.
She could hear the scatter of communications finally; not quite in range, but human voices. No sounds of surprise, so they still didn't see the werecraft.
"My suggestion is to rush up behind the enemy and start firing before we send the warning," Lisel said. "We'll at least have the chance of surprise that way. Otherwise, we have to hold off and wait until they attack us."
"I like surprises," Tana said. Krisin gave a grunt of agreement.
The next ten minutes were the longest of her life. They swept straight in and attacked, taking out four werecraft before any of the others could turn on them. The Belgium launched fighters who took on the enemy, but not before the scout took a bad hit, controls fusing and Krisin taking bad burns on his hands and arms.
By the time they brought the nearly crippled scout to a stop and off-loaded, the werecraft were all destroyed. They had drawn quite a crowd. Lisil helped Krisin out and kept him to his feet while the medtechs moved in.
And there stood Daynal, looking smug as he sauntered up. "Looks like you hit something you couldn't handle without me. Ha ha! And a Catchin for crew? Well, glad I missed this one."
He laughed again.
She kicked him so hard he landed on his ass. Then she turned to Lisil who had helped Krisin to the gurney.
"Lis, you have any problem with me signing you on as permanent crew?"
"None at all," he said with a bright smile that showed way too many sharp teeth.
"Good. Let's go have dinner."
They walked away.
No one helped Daynal back up.

Love this. How am I missing this story?

This is a stand-alone flash fiction. I might do more with them at another time.

I like the world being built within this. Would good to see more stories within it.