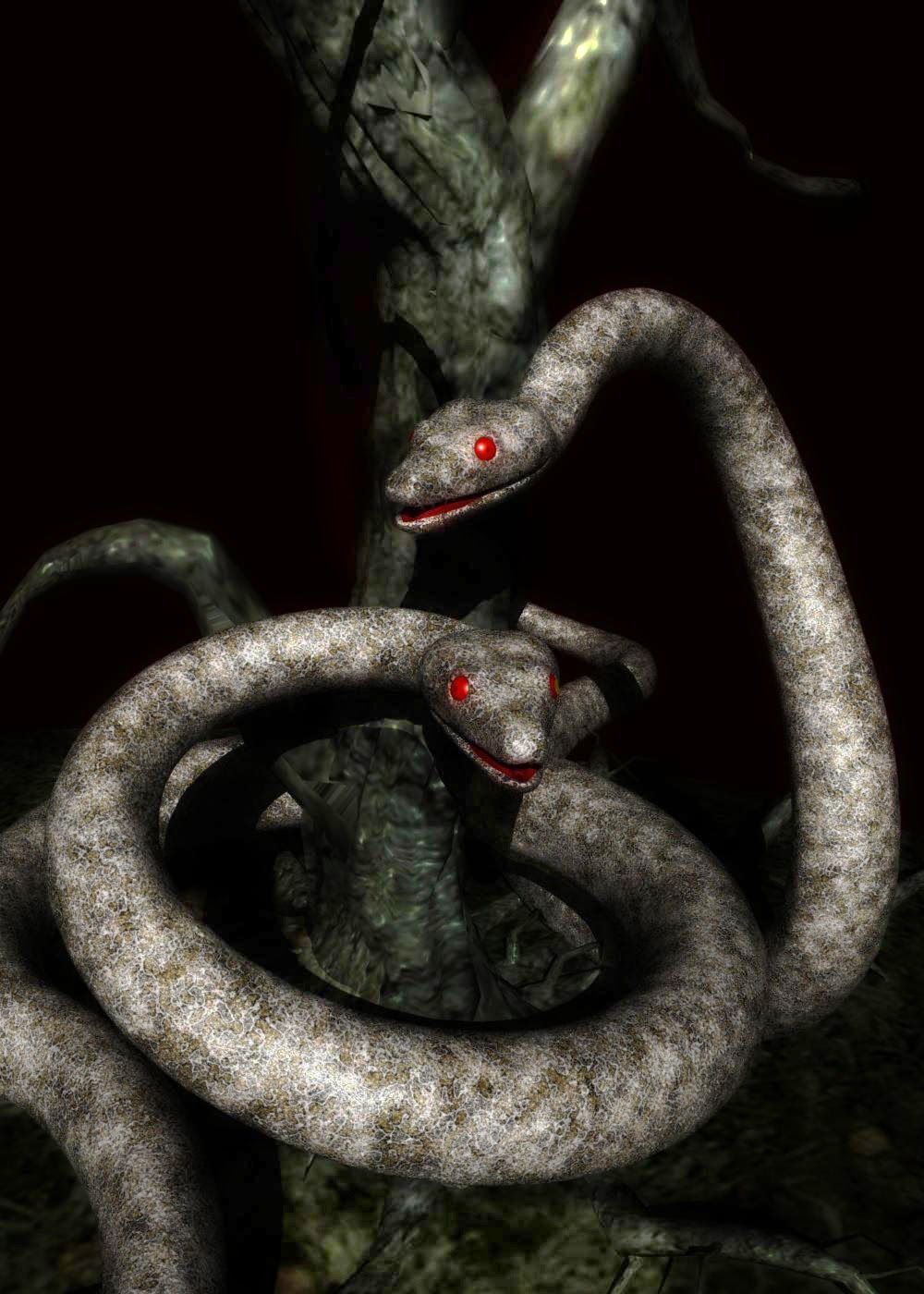 Stone grating against stone is probably one of the most unpleasant sounds in the world. I hated it so much that even the idea of giant stone snakes coming after me couldn't quite overcome the instant irritation.
"Stop that!" I shouted, my hands going to my ears.
They didn't. I could see red glowing eyes blink and they moved faster.
"Inside," Davis shouted.
Davis shoved harder against the door. I put all my weight to it as well, even though every bruise, cut and bullet wound hurt. Yeah, this had not been a good set of days for me.
Creston arrived. I shouted when I saw him and we all scattered to what cover we could find, while still trying to stay away from the stone snakes. He brought up the rifle and fired towards me, and stone chipped to the right of my hand. I dropped lower.
Another shot hit the wall over my head.
The 'dead' trees began to reach around the building, limbs flailing so it was impossible to avoid being slapped by them. I heard Lord Snow give a growl of such anger that I turned and saw him bounding on top of a stone snake that immediately released Edmond from his grip. The smaller cat leapt away, apparently unhurt. Lord Snow ran too, because while he'd surprised the stone snake, he had clearly not done it any harm.
They both raced back up the steps. Another bullet hit the wall near me. As long as he stayed focused on me, the others should be safe, I realized. However, it was getting harder to avoid bullets, trees and stone snakes.
"I've had it!" Maggie suddenly shouted.
I looked at her in surprise as she brought her staff down hard on the stone at her feet. She hit the stone three times, and the top part of the staff burst into light so bright I had to cover my eyes. The snakes stopped and reared back, their heads swaying from side-to-side. Cobras? I didn't want to think about the acid they might spit.
Creston gave a shout of surprise and retreated back into the darkness, though I didn't think he would stay there for long. We needed to get to better cover. Go back into the darkness? What would the snakes do when we tried to get past them?
Davis leapt to my side and gave a shake of his head. "I don't know why they aren't letting us in," he said.
"Did you really expect it to be easy?" I asked. "What is Maggie going to do?"
"I have no clue, but I think she's reached her limit of tolerance.
Maggie ahd turned from the snakes and quickly headed up the steps to the door again. I pulled the tattered remnants of my courage back together and followed her. I thought Davis wasn't quite as quick to join us, probably being wiser.
Edmond and Lord Snow bounded up the steps as well. When the snakes started moving again, Edmond turned and hissed at them. The snakes were not deterred, but that may have been their mistake. Edmond may have been small, but he was tricky.
Maggie used the base of the staff to pound on the door. I not only heard the blows, but I felt them reverberate through the building. Then I felt something odd -- a hint of irritation that came from the building itself. I really had to get used to things having emotions.
She pounded again. I wasn't sure I wanted the building annoyed with us. The snakes where starting to move faster again.
"You are the ones who wanted us here!" she shouted. "And if you don't let us in and get this over with, I'm going to keep pounding on the door until Stonewild gets really annoyed and kicks us all out!"
She lifted her staff again, but before she could pound, the door popped open. The interior looked dark and uninviting and he had to wonder about more stone snakes. However, Edmond rushed in and Lord Snow followed. Apparently they didn't much like stone snakes, either.
Maggie waved for me and Davis to go in. She followed, the light of the staff so bright it brought the long corridor into sharp relief, which really didn't help since the stone walls were moving.
The door snapped shut behind us just as I saw Creston darting from the dark again. I thought I heard a bullet hit the door, though the sound was muted. I suspected Creston was very annoyed by now.
"Why do I feel as though I just walked into a giant mouse trap," Edmond asked, his ears going back.
"Let's hope we don't find any giant mice," Davis said.
I didn't think he was joking.
Maggie moved out in front of us. The corridor was wide enough for two of us to walk side-by-side, but that would have put us both very close to the walls. So we went single file down the middle of the hall: Maggie, Edmond, Me, Davis and Lord Snow.
The building stopped feeling annoyed, which helped. My feel for magic kept going on a roller-coaster ride, but at the moment everything seemed as calm as it had ever been since my arrival at Elsewhere.
Of course I didn't trust it.
"The council is here?" I asked.
"Yes," Maggie said. She still sounded annoyed. "I don't know what the hell their game is --"
"What can I expect?" I asked. "What should I do?"
She stopped and turned to me, taking a deep breath. Light of the staff had started to fade, but there was another light ahead.
"You have a gift, Mark," she said. She even smiled finally. "I don't know what's going on and I have no idea how they are going to react when we arrive. The best I can say is to be truthful."
I suspected that sounded easier than it would be.