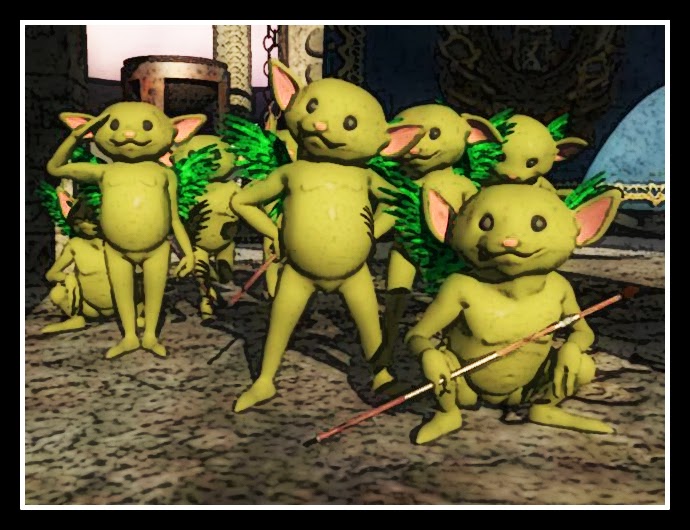 I was the first to rush ahead at the sound of the snarling cats. Something was wrong. I wasn't surprised. No one was, of course. I was now certain someone didn't want me to get to the Council and we would have more trouble every step of the way. Since I didn't know why, their constant interference just annoyed me all the more. I especially didn't like that they were attacking my friends.
My allies.
I rounded the corner only a couple steps ahead of Maggie and Davis, and it was a good thing they were so close behind because I wasn't ready for the trouble I faced. Small snarling green creatures filled the entire street, their huge ears flopping as their small green wings propelled them up and down. Some held small spears they shook in my direction as soon as I appeared. My first instinct was the laugh. I suspected this was not the right reaction.
They had snared the two cats in a trap; a huge net had fallen over them and then appeared to have tightened to hold them in place. Lord Snow was trying to bite his way through what must be very tough ropes. All I could see of Edmond was his tail sticking out from under the snow leopard.
One of the little green creatures landed on a bench and began jabbing at Lord Snow with his spear. I didn't think the weapon could even penetrate the fur, but the little creature was dancing with delight.
"Ha!" he shouted, a squeak of a voice that rose above all the shouts of the others. "Ha! Call us mice on two legs, will you! When was the last time mice trapped the cats, huh? What? Cat got your tongue? Or maybe the mice got it!"
The little green creatures all let out peals of laughter. Lord Snow twisted a bit and Edmond's head popped out from under him. The black cat did not look happy.
"I take it these are friends of yours, Edmond?" Lord Snow asked, his voice deceptively calm.
Edmond growled, well beyond speech at this point.
I took a step closer. The little things stared to jab at me and the spears did prick my ankle.
"Stop that," I ordered. "Get back."
Something odd happened. They all leapt backwards at the same time, some tangling with others. The one on the bench took one step away and then froze and appeared to have lost all interest in the cats. His spear came up for a moment and then lowered again.
"You -- you cannot order us," he said, though he sounded entirely uncertain of those words. "Only the fae can order us --"
"He's half-fae, Lord Egan of the Pixies," Davis replied. He stepped forward and gave a quick bow. "And he is a Protector. I don't think you really want to annoy a Protector, now do you?"
"Protector," Egan replied and looked me over. "Not sanctioned."
"Not yet," Maggie agreed. "We're heading to the Council now. Do you really want to slow us down?"
"We weren't after you," Egan said. His ears flickered and his eyes shifted to the cats. "You can go on."
"Not without my allies," I said.
He sighed. "We have to let the cats go?"
"I'm afraid so," Davis replied. He was clearly trying not to smile.
"It always works this way," Egan said and sighed. He gave a wave of his spear. "Let them go."
Little voices rose in protest as they went about the work of loosening the edges of the net. "Not fair! We got him good!"
In a few moments both cats were free and I feared they were going to leap on the Pixie Horde and have a quick snack. Oddly, the pixies didn't appear to worry, though. Lord Snow finally shook himself from the last of net and stretched. Edmond came out of the net last and turned his head from side-to-side, clearly trying to work a kink out of his neck.
"Well," Edmond said. He looked at Egan and gave a nod. "Well done, just bad timing."
"Yeah, figured that out," Egan said and moved to sit on the edge of the bench. "But the ball is in your court now. Sorry we didn't have a chance to celebrate this one, but I can see you're involved in real trouble."
"Yes," Edmond agreed. "We'll celebrate later."
"You're heading for Forest and the Council?" Egan asked. The others were coiling up the pieces of rope that made the net. I watched, intrigued. There was clearly magic involved. "There's a disgruntled earth elemental skulking around up that way. Kind of obvious, an earth elemental in town, even when he is trying to be discreet. And did you see the towers take off when your group entered the city? They didn't go to the Council."
"Where did they go?" Maggie asked.
"Straight for South Street and out into the desert."
"That's troubling," Lord Snow said. "Thank you for the information, which offsets any inconvenience you created."
"Yeah, sorry." He sat there and kicked his feet like a child. "We sensed Edmond in the area, but we didn't know there was another really big kitty with him. You're Lord Snow, aren't you? I thought you worked for the winter dragon."
"I do."
"And the towers headed straight for the summer dragon. If there is going to be a clash between those two powers, I think we'll just go dig into our burrows until everything blows over. Nothing personal, but I do hope we're not in for another ice age."
"Quite honestly, not something I would look forward to, either."
The pixie gave a laugh and then stood and launched himself into the air. He gave a quick, sharp whistle and the rest of the pixies lifted upwards and away they all flew like the down from a thistle.
Yeah, I had gone way over the edge.