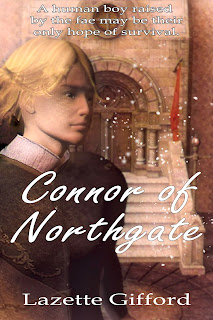 "I think I'll need more training from Rion.  And everyone else.  Especially with the magic because I don't know what it does.  It just ... sits there.  Sometimes it feels as though something moves within me.  Is it like that for the rest of you?"

"Not really; our magic is not something added later.  This might explain why people like gate lords are different.  That special power isn't simply amplifying what we have, but adding something different to it."

They spent the next few hours talking about the different forms of magic.  Understanding how the fae magic worked helped Connor, and by the time they finally camped, he at least felt he could examine his own changes and begin to make sense of them.

He slept well, mostly from exhaustion.  The next morning they were on their way before the sun rose.  He didn't need Liam to tell him they were riding into danger.

"They will know you are gone by now," Braslyn said when they stopped by a brook.  "This is where we part company.  You follow the brook, staying in the water, and disturbing as little as you can.  Do not use magic, my friends.  They'll sense that. And it would be best if you went on foot."

Connor had already guessed that part and was already climbing down from his mount. The others muttered quietly but did the same.  All in all, it made sense.  Anyone who came after them would see the horses went on with the centaurs, and this was no different a brook than a half dozen they'd already crossed.

Braslyn reached over and put a hand on Connor's shoulder.  The centaur looked worried.  "Take care.  All of you.  Galen has allies in many places, and there is no telling who might side with him.  Be very careful."

Connor didn't think this was a warning they really needed, but he took it to heart anyway.  He didn't want to mistrust everyone, but he supposed he would have to look at even people he had known all this life.  Not everyone at Northgate had been happy to have him around.  Even if they hadn't backed Galen before, they might now.

At least it was warm enough that trudging around in a brook wasn't too bad.  He twisted his ankle a couple times on the loose rocks, but they went several miles before they climbed back out, and then over a log where they wouldn't leave prints in the mud.

They hurried into the woods and rested, listening for any sounds out of the ordinary.  Connor hoped the others could tell because everything sounded odd to him.  He had to rely on them.

"We should head northeast from here," Antisha said.  She knew the land better than any of them.  "That will keep us to the hills, which is a rougher country, but we're less likely to be seen there.  More cover."

Antisha looked at Connor as though she expected him to say something wise.  So he did.

"You lead the way, Antisha," he said.  "I don't think any of the rest of us know this area so well."

They all agreed. Antisha looked relieved. Did she really think he would try to take command in a situation where he knew so very little?  Or did she worry more about the others?  They were all going to cooperate with her and hope to survive.

Druce walked with Nylia. They'd apparently made a reconciliation at some point.  Connor was glad to see it because he wanted calm within the group.

Connor knew that he needed to be able to trust these people, and none of them dared be influenced by their emotional state. It bothered him, to look at his friends and try to imagine how he might mistrust them.  How they might turn against him.

"You look glum again, Connor. It worries me when you look glum," Nylia said with a slap on his back.

Connor hadn't expected the others to look shocked.  How could they not realize the problem?  He had no idea what he was doing, and after watching Galen, he realized how easy it would be to hunt after power for his own survival.  He looked at them in more shock than they gave him, and realized that he didn't understand them at all at that moment.

"You shouldn't worry, Connor," Nylia said and gave him a bright smile.  "You have us to help you through this. Even that fool Druce has finally come around.  But you have always been wise enough, you know.  So I'm going to ask you something we haven't bothered to say yet.  What do you think we should do?"

Connor knew the answer and decided to go ahead and say it. He had to trust that they would disagree with him if he were, really, not wise.

"We need to ride straight through to Northgate," Connor said, though he hated the thought of that journey.  "Galen thinks we are with the centaurs by now, but that won't last for long.  Northgate is the only advantage we have, and we need to get to what safety we have."

"Yes," Erlis agreed.  He was already preparing to start out again.  No questions asked. Antisha even nodded agreement.

"And teach me magic -- anything I can do with the power I have.  This may come down to a confrontation."

And they didn't argue about that, either.